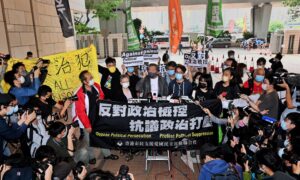 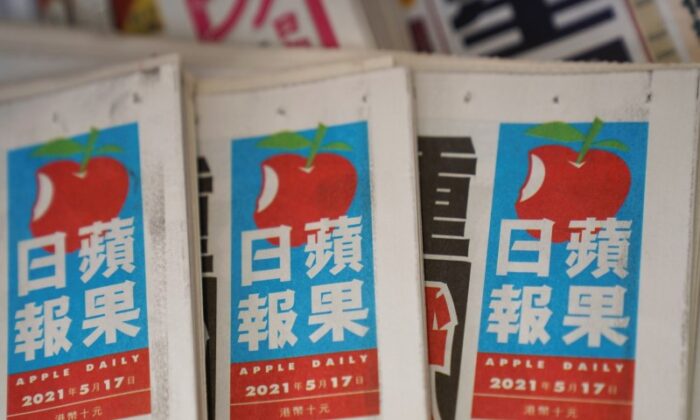 Copies of Next Digital's Apple Daily newspapers are seen at a newsstand in Hong Kong, China May 17, 2021. (REUTERS/Lam Yik)
Hong Kong

HONG KONG—Hong Kong police arrested five directors of the Apple Daily newspaper early on Thursday morning, including its editor-in-chief, the media outlet said, in the latest blow to one of the few remaining independent newspapers left in the former British colony that continues to be critical of the Chinese regime. The Apple Daily is owned by jailed dissident Jimmy Lai.

Hong Kong Police’s National Security Department said in a statement that five directors of a company had been arrested on suspicion of collusion with a foreign country or with external elements to endanger China’s national security under the widely protested “national security law” imposed on the city from Beijing.

It said only that the five included four men and a woman aged between 47 and 63. It did not provide other details.

The newspaper said that at about 7:30 a.m. local time around 100 officers arrived at its headquarters in Tseung Kwan O in the New Territories district and cordoned off the area.

National security police said in a statement that officers had searched a media company in Tseung Kwan O with a warrant that covers “the power of searching and seizure of journalistic materials.”

The operation was ongoing and aimed to gather evidence for a case related to suspected contravention of Beijing’s security law.

The move is the latest blow to Apple Daily after authorities last month directed jailed tycoon Lai’s shares in Next Digital, publisher of the newspaper, to be frozen.

In May, Reuters reported that Hong Kong’s security chief sent letters to Lai and branches of HSBC and Citibank threatening up to seven years in jail for any dealings with the billionaire’s accounts in the city.

Lai was arrested in August last year and later charged under the national security law, which has seen freedom of speech and basic rights severely curbed in what was China’s freest city due to the system of governance being outside the Chinese Communist Party’s (CCP’s) control. The anti-CCP and pro-democracy activist’s assets were also frozen under the same law.

He has been in jail since December after being denied bail in a separate national security trial. He faces three charges under the new law, including collusion with a foreign country.

By Sharon Tam. The Epoch Times contributed to this report.