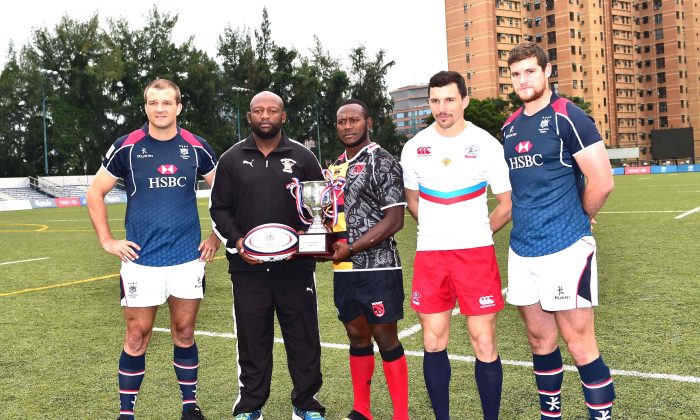 HONG KONG—The HKRU Cup of Nations 2016 is ready to roll, the team coaches and captains of the 4 teams have arrived in Hong Kong ahead of the start of the competition on Friday Nov 11.

The competition is a round robin between defending champions Russia, last year’s runners up Hong Kong, Zimbabwe and Papua New Guinea, with each team playing the other team once.

The Hong Kong squad were given an extended break from the Premiership to participate in an international training week. The week allowed Hong Kong Coach Leigh Jones to put his side – comprised primarily of Elite Rugby Programme players, Hong Kong sevens squad members, semi-professional players in the domestic leagues and National Age Grade graduates, through their paces ahead the tournament.

“During the training week, we played a mini Cup of Nations format, effectively simulating the varying styles we are likely to face in the Cup of Nations,” said Jones.

“This is a great competition for us as it offers the opportunity to expose our players to high intensity matches against teams outside of Asia. With three very different tests in the space of nine days, we will need to be smart in how we use the squad and in selecting the right players to suit the different approaches we will see,” Jones added.

“It’s been difficult to get information on Papua New Guinea, so they are a bit of an unknown but we expect a tough encounter,” said Jones.

“They should be quite physical and hard-hitting, so we will need to counter that with a very structured game and will rely on our set piece to perform,” Jones added.

Talking about Zimbabwe Jones explained, “Zimbabwe are very athletic and play a very individual style of rugby. We will need to rely on our collective strength and discipline to overcome their individual skills.”

Once again Russia is likely to prove the biggest hurdle to Hong Kong’s efforts to win the Cup for the first time. Russia has had a particularly muscular build-up, having played their most recent tests in June – against tier one unions Canada and USA (both losses). Prior to that, Russia dispatched Spain, Germany and Portugal in the 2016 European Nations Cup, losing only to Romania (30-0).

“Our approach for Russia will be almost diametrically opposite to the first two matches. They are power orientated with a big set piece and play a Northern Hemisphere style game. We will need a different philosophy for this test, one where we try to bring a high tempo into the game, negate their forward dominance and rely on more of our game-changers in the backline,” Jones added.

Russia’s coach, Aleksandr Pervukin explained “On the one hand it is a great way for us to kick off our preparation for the European Championship event on the other hand it is an opportunity to give our young players a good test, and test their abilities against good teams. For us it is an important tournament and we hope that the tournament will be a success for us.

Russia’s Captain, Vasily Artemyev added “We have managed to bring most of the strongest players over here, some of the veterans have been given a bit of time off to recover from a few injuries but we have managed to bring a strong squad it is the last opportunity as the European Cup starts in February so we need to come out and play together, Anything we can do now will be beneficial to us for that.

Zimbabwe have done more preparation this year and expect to improve on last year’s performance. The Zimbabwe coach, Cypren Mandenge said “We are taking this tournament seriously, the average age of our team is 24, so we hope to do well. In terms of preparation we have done better preparation than last year. Last year we were just here to play, this year we have put in a week of intensive training, when we were joined by our best overseas players.

Zimbabwe Captain, Denford Muiamangira  said “Last year when we came here we did not know what to expect and I think that was evident from the result but this time around we are more prepared we have a young team as well and we have only about 50 per cent of the team we had last year and the rest are new guys. This year we are not just here to make up numbers but we are actually here to try to win, so we are very excited and we have a point to prove”.

According to Papua New Guinea coach, Sydney Wesley they see the tournament as helping with their development at home “This gives us a good opportunity to test out a lot of players ahead of the World Cup Qualifiers. The team is relatively young with just 3 players over the age of 30. We want to use this tournament to build and create a new future for Rugby back home”.

Leigh Jones summed up by saying: “We are looking forward to it. It is great to have our old enemy, Russia back to play against. For our guys it is great exposure to the southern hemisphere style of Rugby. Russia will be well coached, very strong, very powerful, very strong squad. With Zimbabwe it will be good exposure for our players to the southern Hemisphere style of rugby, invaluable in developing Hong Kong Rugby”.