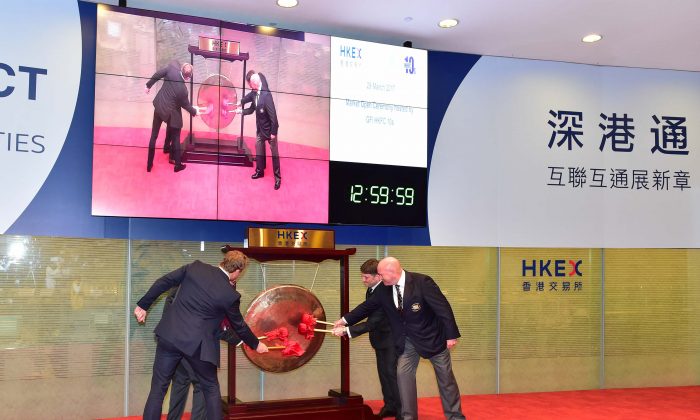 HKFC Rugby 10’s, Ready for Off with Launch at Exchange Square

Business man, explorer and England Rugby international Lewsey, completed a distinguished 10 year Rugby playing career with England from 1998 until 2008. In 2002 he was a member of the first England team to win the Hong Kong Sevens.

He played in 13 Championship matches for England, winning all 13. He now works in Hong Kong and is pleased to support the HKFC Rugby 10s.

The Exchange Exhibition Hall is a rare setting for a sports-related event, the launch included a ceremonial banging of the gong to launch the 10’s as well as to open of the afternoon trading session.

The HKFC 10’s is the traditional Hong Kong Sevens lead-in event which will take place at Hong Kong Football Club on Wednesday and Thursday April 5 and 6.

Although well known as a social event, the Rugby is serious, and the tournament standard just gets better and better each year. Many famous Rugby names take part alongside current sevens specialist.

Sixteen teams will be on display, split into 4 Pools for the initial round robin matches.

Pool A is headed by The Penguins, last year’s winners, who will be pitted against Waterboys, Irish Vikings and Silver Dragons.

On completion of the Pool matches the top 2 teams move forward to Cup quarter finals and the bottom 2 of each Pool compete for the Bowl.