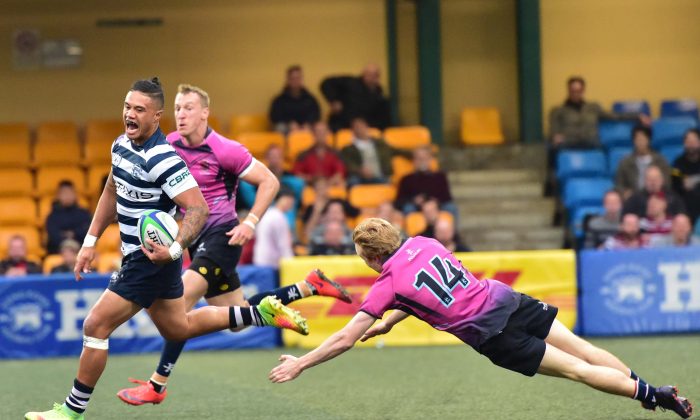 Valley and Kowloon finishing 1st and 2nd in the league had byes through to the semi-finals.

Quarter final matches were between HKFC and HKCC at Sports Road and Bloomberg HK Scottish and USRC Tigers at the Rock.

The biggest upset in last week’s matches was the surprise win of Tigers over HK Scottish. In the league Scottish amassed 43 points and finished a close 3rd just overtaken by Kowloon in the final stages. They won 9 games as opposed to Tigers who could only muster 3 wins and finishing bottom of the table on 18 points. But Cup games are different – it is all on the day.

Tigers got their campaign off to a good start with an attacking first half that Scottish were unable to match. Attacking from the off Tigers were 17-0 after 15 minutes of play. A Scottish maul walked a try over the line in the 20th minute but the Tigers responded with a third try to end the half 24-7. The second half started with an early Tigers try and advanced to 31-7 after 50 minutes but from there on Scottish dug in. They fought back to 28-31 but an intercepted Scottish pass allowed the Tigers to grab a late try to seal the win 28-38. Tigers’ scorers were Casey Stone, Robbie Keith, Braam Gerber, Cado Lee Ka-to and Sam Hocking.


At Football Club it was ebb and flow all through the match Hong Kong Cricket Club started brightly keeping Football Cub pinned in their own half in the early stages, they forced a penalty after 11 minutes and fullback James Love stroked it straight through the uprights to put 3 points on the board. But then HKFC advanced with strong play by their forward line, gaining ground to half way and then pushed close to the HKCC line. They made successive attacks and deciding to run 2 kickable penalties but could not break through. HKCC then forced play back to the centre line before HKFC pushed forward again.

Good work again by the HKFC backs surged for the line and outside centre Tom Issacs crossed the line but the ball was adjudged “not grounded”. From the resulting 5-metre scrumhalf Ben Willis pushed through to score and with the Nathan De Thierry conversion made the score 7-3.


A penalty for HKFC from 40 metres for a high tackle by Alex McQueen on Jamie Hood on 32 minutes fell short but the team was combining well and soon pushed back to the HKCC 5 metre line. But HKCC gained possession and went onto the attack putting pressure on HKFC up to half time but were unable to score leaving the match still at 7-3 at half time.

HKFC made progress again from the kick off gaining a penalty to push the score to 10-3. Then De Thierry received the ball from a ruck 35 metre out and broke for the line in a storming run that looked certain to be a try but he was caught just a metre before the line by McQueen. Cricket Club got relief from the subsequent scrum and then from a line out and moved into HKFC territory. During a series of tackles HKFC’s left wing, Niall Rowark sustained a broken right arm, later diagnosed as a broken radius bone that will need some surgery.

Gavin Hadley and Jamie Hood made progress for HKFC surging close to the HKCC line, the ball was fed to the right from a ruck and Will Munroe broke free to score and together with the conversion pushed HKFC to 17-3 after 67 minutes of play.

HKCC put in tremendous effort to score, pushed close to the HKFC line and made several attempts to score including a break-away for the try line but each time they were pulled back for an infringement leaving the final score at 17-3 to HKFC.