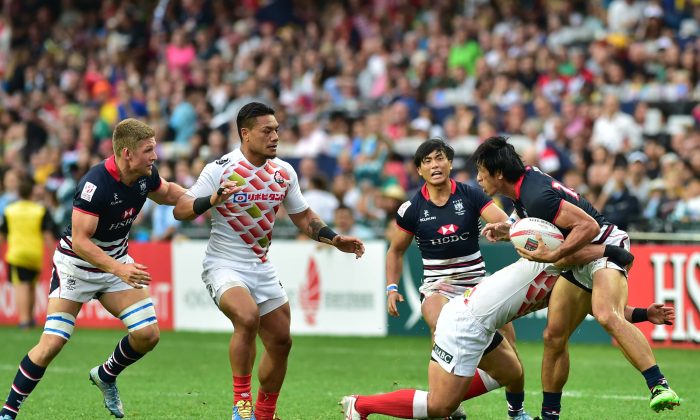 Hong Kong put up a brave performance against Japan in the final of the Rugby Sevens Qualifier 2016, but lost the final 14-24. They will be hoping to go one better this year, but this will be the toughest and most competitive tournament over the Sevens weekend on April 7, 8 and 9, 2017. (Bill Cox/Epoch Ties)
HK Rugby Union

HK7’s: 3 Tournaments to Reflect the Growing Stature of the Event

HONG KONG—The 42nd Hong Kong Sevens kicks-off on Friday April 7. The Hong Kong festival involves three days of non-stop Sevens rugby involving 28 teams in the Men’s competition and four semifinalists from the Women’s sevens event. The Women significantly elevate Hong Kong’s status as the premier event on the global Sevens circuit, by having the Hong Kong Women’s Sevens, involving 12 teams, recognised as the Qualifier for the HSBC Women’s circuit next season. The winner will join the circuit next season, replacing the bottom-placed team. Hong Kong is now three-tournaments-in-one: the main event, the 7th stage on the HSBC circuit; the Men’s Qualifier where the winner joins the circuit next season; and the Women’s event, also a qualifier. Gone are the days of Cup, Plate and Bowl!

In its simplest form Hong Kong is the 7th stage of the annual HSBC World Seven series, played across  the globe in 10 destinations. It started in Dubai last December and culminates at Twickenham in May. Current leaders are South Africa, who’ve won four of the six tournaments, but in Vancouver (the last stop) they were beset by injury and lost one star player to Super Rugby. That created an opportunity for England to capitalize on; and the Red Rose team won their second tournament of the series (England also won in Cape Town). Leaders South Africa have 126 points, coming to Hong Kong; England have 103; and Fiji 100.

The teams play for points, but the two teams to watch for in Hong Kong will be Russia and Japan. Russia currently have 18 points and Japan 12: and the team that comes bottom of the League, likely either Russia or Japan, will be replaced by the winner of the Qualifier competition.

It is in the Qualifier tournament where most is at stake and local interest in paramount. Hong Kong men compete against 11 other teams, two from each of World Rugby’s regions. This is the tough tournament of the weekend. You either win or lose. And winner (eventually) takes all, there is no consolation, or opportunity next week in Singapore to make-up the points. One team will qualify, all others will not, and will just have Hong Kong memories.

The competition is in three pools of four, with the top two teams and the two best third place sides progressing to the quarterfinals. Hong Kong faces tough competition. In Pool A, the two top sides are Germany and Tonga; in Pool B Hong Kong is seeded No 1, and Chile, seeded No 2 competed recently in Vancouver; in Pool C, top seed is Spain, who qualified in dramatic fashion for the Rio Olympics in the Men’s Repechage in Monaco, and Papua New Guinea. Other teams to watch for include Uganda, Namibia, Sri Lanka, Uruguay, Jamaica and Guyana.  This will be by far the toughest and most competitive tournament over the weekend.

With the investment, Hong Kong has made in players and resources available for Sevens, and having lost to their nemesis Japan, last year, this represents an opportunity to test their progress over the year, and whether new coach, Paul John can produce a Midas Touch in his first tournament on Hong Kong soil.

Across the road from the Hong Kong Government stadium, and beginning the day before (on the April 6), the Hong Kong Women’s Sevens will get underway. This is another tough tournament for the teams, and for Hong Kong. Again; winner takes all. It follows the same format as the Men: three pools of four teams. Hong Kong, in Pool B face Argentina, Belgium and Kenya: not easy at all.

In Pool A, Japan and China face the Netherlands and Jamaica; and in Pool C South Africa face Colombia, Papua New Guinea and Italy. This is the best quality Women’s event to be staged in Hong Kong. It will be benchmark competition for the Hong Kong women, who have qualified for the Women’s Rugby World Cup in Ireland, but have yet to deliver on early promises in Sevens. Having attended training camps in New Zealand and Japan, it’s hoped this will translate on the pitch into a team that challenge the very best in women’s sevens rugby.