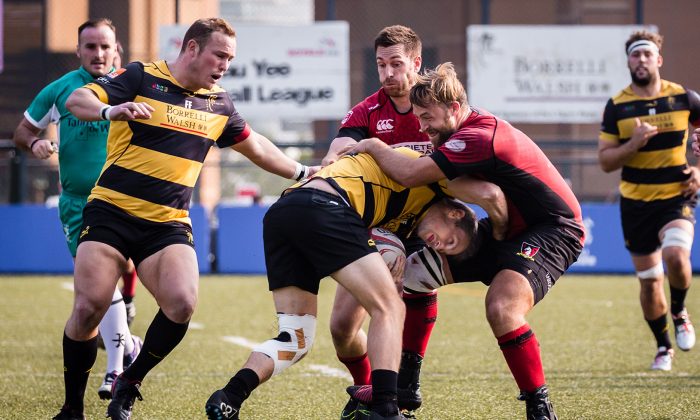 Kowloon leapfrogged Natixis HKFC with a storming 2nd half performance to beat bottom of the table Herbert Smith Freehills HKCC 47-17.

With just 2 rounds to go in the Championship there will be an important head to head battle at Shek Kip Mei in the next match on Feb 11, pitting the two top teams against each other, the outcome of which could decide the Champion, although in the last match of the regular season Scottish have what seems on paper to be a tougher match against inform Kowloon, while Valley will play the struggling HKCC.

In the next round there will also be head to head confrontation for the 3rd place spot between Kowloon (35 points) and HKFC (32). Kowloon will have a tough final match against HK Scottish while HKFC may have a better chance against Tigers.

In the early game at King’s Park last Saturday Jan 21, Tigers took on Valley and in a lively start Tigers looked well-tuned and soon made inroads into a Valley defence trying to find its feet with a number of key players away at the Sevens in Fiji. A break, up the left wing by Tigers put them in a good attacking position and with successive passes across the pitch winger Casey Stone run in for the 1st try. This was converted by Robbie Keith for a 7-0 lead after 5 minutes of play.

Tiger battled up-field again with some good place kicking by Keith again putting pressure on the Valley line. But an infringement by Tigers followed by a good kick up-field was collected by Doug Fluker who charged to the line to score. The conversion attempt by Matt Rosslee was wide. But the action brought Valley to life, winger Ally Maclay intercepted a Tiger’s pass, raced for the line and with Rosslee’s conversion Valley moved ahead, 7-12 . A yellow card for Josh Hrstich did not help Tigers cause and Rosslee slotted over the resulting penalty to lead 15-7. Keith converted a penalty for Tigers to bring the score to 15-10, but two more scores before half time by Valley, a 2nd for Maclay and then one by fly half Ryan Duplooy, both converted by Rosslee pushed the score to 29-10.

Valley looked well in control going into the break, but Tigers looked a different team in the 2nd half, a 2nd try for Stone and Keith took the score to 22-29 with still time on the clock. A try Jamie Chipman converted by Keith brought the scores level at 29-29.

In the 80th minute, Tigers pushed for the win and were within metres of the line but Valley defended well. A pass-back to Keith for a drop-goal attempt was charged down giving relief to Valley and a final score of 29-29.  Valley will rue the lost points, but try bonus points for both teams gave them 3 points, which was sufficient to keep Valley in equal top position, although placed 2nd on game points difference.

In the 2nd match at King’s Park Kowloon maintained winning momentum beating HKCC in a points’ bonanza racking up a 47-17 win.

Valley hold onto the lead position in the Premiership with Scottish 2nd but with both on 43 points. Kowloon are now 3rd place on 35 points; HKFC have 32 points, Tigers 17 points and HCC are placed bottom on 15 points.