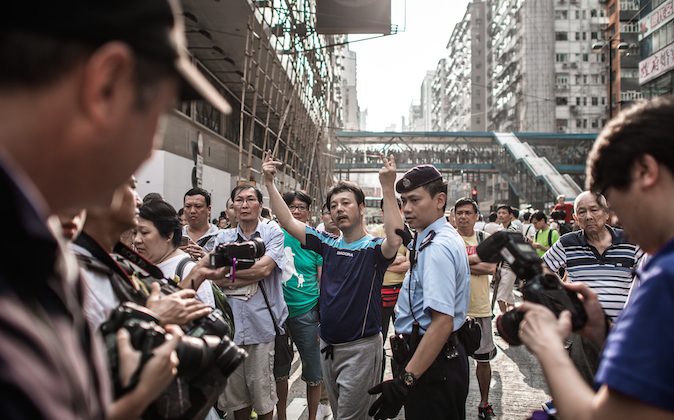 An anti protester gestures towards pro-democracy demonstrators as they protect a barricade in an occupied area of Hong Kong on October 3, 2014. (Philippe Lopez /AFP/Getty Images)
China

In a television interview last Saturday, Tsang said that he was touched by how female police officers protected Umbrella Movement student protesters from triad members and anti-Occupy Central groups when violent scuffles broke out in Mong Kok on Oct. 3.

The female police officers were like “kind mothers protecting their children,” said Tsang, according to a Ming Pao report. Also, when asked if police really used minimal force to suppress the protesters, Tsang evaded the question, saying that police didn’t intentionally hurt anyone.

Pro-democracy supporters, who remembered the Oct. 3 Mong Kok incident as one where the police just stood by and let pro-Beijing thugs batter the protesters, as well as the numerous acts of police violence during the 79-day long street occupation, called out Tsang’s misrepresentation of the police.

Joshua Wong, one of the most well-known faces of the Umbrella Movement, posted, “My mother won’t hit me with a police baton” on his Facebook page.

Local songwriter Leung Bak Kin even tweaked the lyrics of “Truly Love You,” a song by popular 1980s Hong Kong rock band Beyond  to poke fun at Tsang’s comments. The parody is retitled “Truly Bash You.”

And on Sunday, pan-democratic lawmaker “Long Hair” Leung Kwok-hun led about 30 members from the League of Social Democrats party outside police headquarters in Wan Chai to protest Tsang’s statements and demand his resignation.

“[Police] seem ‘caring’ on the surface, but they hit protesters in the dark,” Leung said.

Andy Tsang did get some backing, however, predictably from pro-Beijing legislators.

LegCo member Regina Ip, who has been very vocal in criticizing the Umbrella Movement, said the police commissioner was trying to convey how restrained the police were in dealing with the protesters with his “kind mother” comment, Ming Pao reports. Protesters being protesters naturally wouldn’t view the police as caring, Ip added.

New People’s Party lawmaker Michael Tien also supported Tsang and his comments. According to Radio Television Hong Kong, Tien said that police showed “great restraint and should be applauded for its professionalism.”