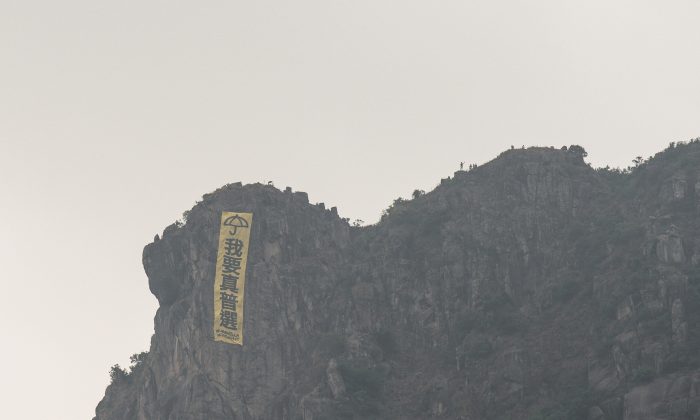 You can’t keep Arnold Schwarzenegger from playing the Terminator cyborg in the titular movie franchise. Neither can the Hong Kong government keep the “Lion Rock” banner away from Lion Rock.

On Sunday, Dec. 28, a 90-foot high yellow banner bearing an umbrella logo, the Chinese characters “I want genuine universal suffrage,” and Twitter tag “#Umbrella Movement,” was flown from the cliff face of the famous Lion Rock granite hill in Kowloon.

The banner appears to be identical to one that was hung about two months ago by “The Hong Kong Spidie,” a group of rock climbing and Spider-man enthusiasts.

“This kind of fighting against injustice, strength in the face of troubles, is the true Lion Rock spirit,” said a rock climber dressed up as Spider-man on Oct. 23.

The “Lion Rock spirit,” a term popularized after a 1970s Hong Kong television series “Below the Lion Rock,” refers to the positive attitude, sense of community, and perseverance that Hongkongers possessed during the tough economic years of the sixties and seventies.

The original “Lion Rock” banner would go on be an icon of the Umbrella Movement.

The mini “Lion Rock” banners were hung at the Admiralty, Mong Kok, and Causeway Bay occupied sites, schools and other public places. Most of these banners can still be found around Hong Kong after the occupation was cleared. Protesters also carried the “I want genuine universal suffrage” banner during rallies, marchers, and during the “Shopping Revolution.”

No group has claimed responsibility for putting up the new “Lion Rock” banner.  It was taken down five hours after it went up, according to Sky Post.

A number of other banners have been hung up on hills in Hong Kong this month. On Sunday, a banner with the Cantonese phrase “Come On, Hong Kong!” from the Devil’s Peak hill near Yau Tong. Earlier, a “CY, step down” (a reference to hugely unpopular Chief Executive Leung Chun-ying) banner flew from Lion Rock. “Don’t forget the original goal” was found on Victoria Peak.

All were removed by the authorities.

But like Schwarzenegger’s Terminator, pro-democracy demonstrators are likely to be back with another banner in the near future.