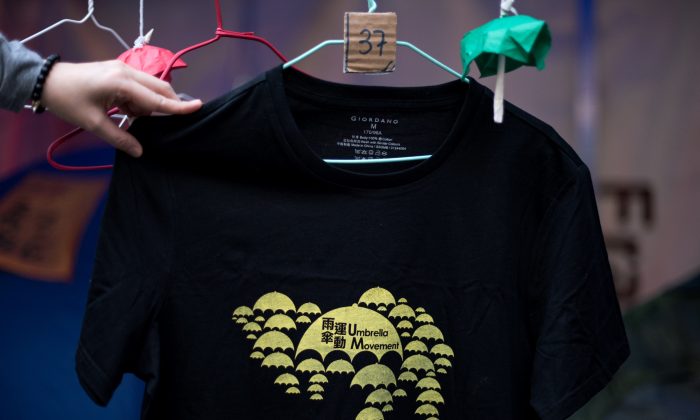 Welcome to HK Happenings, a column featuring snippets of the latest Umbrella Movement-related developments and quirky news in Hong Kong.

Professor Lau Siu-kai, the vice-chairman of the Chinese Association of Hong Kong and Macau Studies, and Chinese People’s Political Consultative Conference (CPPCC) member, says that Beijing “is worried that Hong Kong will become a base for subversion,” South China Morning Post (SCMP) reports.

Lau cites the recent Hong Kong student protests as an example of Hongkongers increasingly questioning the central government’s authority, an act that he called “disrespectful.”

In response, Yvonne Leung, a prominent member of the Hong Kong Federation of Students, argues that the Umbrella Movement doesn’t seek to oust the Chinese communist regime.

“The demands of the umbrella movement are very clear: it fighting for genuine universal suffrage in Hong Kong,” Leung said, according to Radio Television Hong Kong. “What we are trying to do is ask the Chinese government to comply with their own promise instead of trying to do anything related to subversion.”

Quick recap: The Umbrella protests were inspired by the Standing Committee of the National People’s Congress’s (NPCSC) Aug. 31 ruling to keep the status quo for the 2017 Chief Executive elections, i.e. “universal suffrage” for a small pro-Beijing election committee to choose two or three Beijing-approved candidates, with Beijing retaining the final say on the results. In 2007, Beijing said that Hong Kong “may” be granted universal suffrage for the 2017 CE elections and the 2020 Legislative Council elections.

In the pan-democrat camp, lawmaker Emily Lau said in a Letter to Hong Kong radio broadcast on Sunday, Dec. 28 that: “It is not for Beijing to unilaterally declare the Joint Declaration null and void.”

Lau is responding to Chinese diplomat Ni Jian and Hong Kong Secretary for Constitutional and Mainland Affairs Raymond Tam’s insistence that the 1984 Joint Declaration is a done deal and Britain has no obligation to Hong Kong. Ni and Tam made those comments in explaining why British Members of Parliaments were banned from entering Hong Kong in December to conduct an independent inquiry into the Joint Declaration’s implementation.

The Sino-British Joint Declaration, an international treaty signed between then British Prime Minister Margaret Thatcher and Chinese leader Deng Xiaoping, ensures that Hong Kong would be given a “high degree of autonomy” to manage its own affairs, and retain its way of life, rights, and freedoms for a period of fifty years after returning to China in 1997.

Speaking of rights, police may have been abusing theirs in a case involving the slapping of a 19-year-old pro-democracy protester.

Amy But was arrested by police in Mong Kok on Christmas Day, and was apparently assaulted in the police car on the way to the station.

According to SCMP, But was smacked in the ear by plain-clothes officers until she bled. When But asked for the officers’ identification numbers so she could lodge a complaint with the Complaints Against Police Office (Capo), the officers threatened to charge her with “police assault and obstructing police work.” But decided not to complaint to Capo, saying she had “no confidence” in the institution.

Chan Shu-fai of the Civil Human Rights Front says that people are afraid to seek Capo because they think it’s “useless” or worry that they would be charged with an offense instead when they complaint. The Independent Police Complaints Council (IPCC) also won’t be able to follow up because abuses have to be reported to Capo first before they can act.

However, if pro-democracy movement related abuse cases make the IPCC, there’s no guarantee it will be addressed. Democratic Party lawmaker Helena Wong told SCMP that the IPCC’s members are selected by pro-Beijing Chief Executive Leung Chun-ying, and Leung didn’t appoint any pan-democrats to the “independent” police checking body for the next two-year term.

In summary, it’s Catch-22 for pro-democracy supporters, who can’t be certain how the law will work to protect their rights. Amy But’s case certainly doesn’t help to restore faith in a police force that has lost the public’s trust during the Umbrella protests for acting violently towards protesters, the press, and even innocent passers-by.

Finally, the Lo Hiu-pan’s iconic “Raise the Umbrella” song, which has become a protest anthem of the Umbrella Movement, has made the top five songs of the local Commercial Radio awards, and could take Hong Kong’s 2014 “Song of the Year.”

Lo, a “part-time musician” and sound-effects producer, supposedly wrote the song in less than two days after police used tear gas on protesters on Sept. 28, SCMP reports. Cantopop star Denise Ho, singer Anthony Wong, and lyricist Lam Jik helped him tweak the lyrics, and they recorded the song together. After Lo, Ho, and Wong performed “Raise the Umbrella” for the first time to the Admiralty protest site crowd on Oct. 4, the song took off on Youtube and the local airwaves.