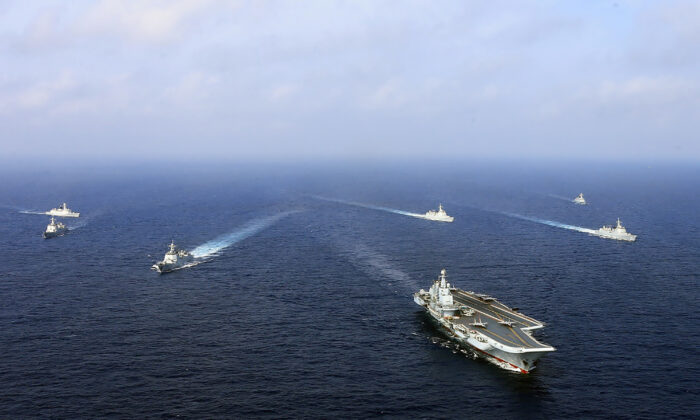 China's aircraft carrier, the Liaoning, sailing with other ships, holds a "live combat drill" in the East China Sea on April 23, 2018. A show of force by Beijing's burgeoning navy in disputed waters has riled neighbors. (AFP via Getty Images)
Thinking About China

The balance of power is a defining historical feature of international politics dating to the ancient Greeks in the West and the Han Dynasty (202 B.C.–A.D. 220) in China. The logic of the balance of power is that each great power is threatened by others precisely because it has the power to be a threat to its survival. Its logic is as relevant today as in the past.

The Logic and History of the Balance of Power

To provide security for itself, the great power builds its military power to advance and protect its interests. As its own military power is not likely to be sufficient to meet the threats it faces, it must also enlist allies who share the same opponents. The consequence of arming and forging alliances is that military power among the great powers will likely be equal. Fundamentally, each will perceive the other as its principal threat.

In the traditional European balance of power of the 18th and 19th centuries, the great powers—Austria, France, Great Britain, Prussia, and Russia—were able to balance against their threats so long as each was allied with at least one other great power. The result was periods of stability that occasionally failed, resulting in the great power conflicts from European history or that were at times lopsided, as in the Seven Years’ War when Frederick the Great of Prussia stood against the European powers with only Great Britain as an ally.

As European history reveals, a plethora of allies means that the great power has considerable hard power and thus is a worthy ally. Allies are, therefore, more willing to support the hegemon as it requires. The fact that so many states have an alliance relationship with the United States is an indication of each of these factors and that states want to use U.S. military power to advance their aims. Having allies also is the closest to a vote of confidence in world politics.

Conversely, the loss of allies is the closest to a vote of no confidence. Allies back away from supporting a great power or hegemon because its status is increasingly uncertain. There is little desire to be on the wrong side of the rising, soon to be dominant, competitor. It makes sense for regional allies to hedge their bets and begin increasing their own military capabilities or enter an overt or tacit alliance relationship with the rising great powers or hegemon.

Classical balance of power theorists like Hans Morgenthau or Henry Kissinger—at the start of his career—drew their insights from European politics during the classic age of diplomacy before the French Revolution and again after the defeat of Napoleon in 1815 to the start of World War I. They argued that having many great powers was more stable. There was less likelihood of a great power war because each great power had respected spheres of influence and would be conservative in foreign policy, lest one or more of their allies abandoned them as a reckless great power.

The implication of this is that were the world to return to multipolarity with the United States, China, and India equally powerful, at least in an aggregate sense, great power conflict need not occur, and the Sino-American rivalry would be affected by Japan and India’s power. Indeed, this might be beneficial for the United States if India were aligned with it, as is Japan against China, as their combined might could check China’s ambitions.

Such reasoning assumes that China will act as the Soviet Union did. But that is not likely given the fundamental differences between the two countries, most notably in the amount of aggregate power that communist or post-communist China will possess. Either of which will dwarf Soviet power.

A major implication of the logic of the balance of power for the Sino-American relationship is that China’s increasing capabilities will trigger a reaction among its neighbors. This reaction is anchored in uncertainty and concern over how China may use its military might.

Aggregate power is a concern without a doubt, but so is geographic proximity. For example, U.S. power may be greater than China’s, but the United States is a significant distance from the Indo-Pacific even if a number of bases allow it to project power to the region. Presently, China is less powerful but also a neighbor of India, Japan, Russia, North Korea, South Korea, and Vietnam. For China’s neighbors, proximity trumps aggregate power, making the United States an attractive alliance partner.

Due to its latent power, China will not need allies as great European powers in the 19th century did. Indeed, Beijing often seems to be determined to alienate its neighbors and potential allies through its actions in the South China Sea. But the risks of China rising are far greater than considered by the balance of power theorists. But the dangers of miscalculation by the Chinese regime are significantly greater because of the boldness of and determination to confront the United States it possesses.

Accordingly, the balance of power theory expects trouble in the Sino-American relationship and depends upon Australia, Japan, India, and the United States to balance against it, as well as other key actors in the region, including South Korea and Taiwan. Ideally, Russia would abandon its Ukrainian madness and join such a coalition.

The logic of the balance of power explains significant periods of international history and identifies the dangers of China’s rise. Throughout history, great powers have taken gambles based on an insufficient number of great powers pushing back against them to deter their aggression, which has resulted in catastrophic great power wars.

It is likely that the Chinese regime will plunge the world into war unless the great powers and other important regional actors can deter its ambitions.