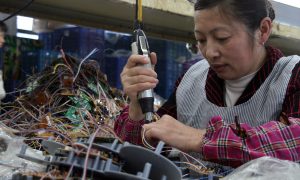 Is Your Iron Spying on You?
0
Share Now
TelegramFacebookTweetEmailTellMeWeReddit
Copy Link
China

The purchase is still just a rumor, and would likely never go through due to the complex history the United States has with finding serious security issues in Chinese-made computer chips.

The Chinese company is the state-run Tsinghua Unigroup. An unnamed source told New York Times the company has prepped $23 billion to purchase Idaho-based Micron Technology. The current largest purchase of a U.S. company by a Chinese state-run company was in 2013, when Shuanghui International Holdings of China purchased Smithfield Foods for $4.7 billion.

Daniel Francisco, senior communication manager at Micron Technology, declined to comment, saying in an email that “Micron does not comment on rumor or speculation.” According to technology news website ZDNet, Micron Technology management said it has not received a bid from Tsinghua Unigroup.

There is a long-standing, yet quiet controversy around China’s role in the U.S. computer chip market—and with this alone, it’s likely that even if Micron Technology agreed to the sale, the U.S. government would intervene.

Infected computer chips from China have brought their share of problems. In May 2012, the Senate House Armed Services Committee released a report saying that counterfeit electronics from China were found in U.S. military vehicles, which included a Navy surveillance aircraft.

“China is the dominant source country for counterfeit electronic parts that are infiltrating the defense supply chain,” the report stated.

And while the problem stemmed from illegal counterfeiting by Chinese companies, the Chinese regime didn’t seem interested in doing anything about it. The report stated, “The Chinese government has failed to take steps to stop counterfeiting operations that are carried out openly in that country.”

At the time, Sen. Carl Levin (D-Mich.) highlighted the seriousness of the issue. He said there was a flood of counterfeit parts, overwhelmingly from China,” and said it’s a problem that “threatens national security, the safety of our troops, and American jobs.”

The Chinese Communist Party (CCP) has a clear motivation for wanting the U.S. chip manufacturer. It’s currently pushing for domestic technology manufacturing, and foreign technology is now banned from Chinese government offices, which includes a massive portion of the market due to its communist structure of state-owned enterprises.

U.S. officials saw this shift coming. A congressional report from November 2013 stated, “Industries such as IT and industrial equipment take top positions” in the CCP’s push to build a high-tech industry. It stated that alongside this push the Chinese regime would start showing more interest in U.S. technology.

There was a push to secure the U.S. supply chain, in order to prevent national security threats from Chinese electronics finding their way into U.S. military and government equipment. A law in the 2014 U.S. federal budget aimed to fix this issue.

The new law required all technology purchased by federal government agencies to go through an approval process that checks for risks of cyberespionage or sabotage.

Most importantly, the new law requires officials to look into the supply chain for technology, and bans anything with a risk to cybersecurity. It states this includes anything “that may be owned, directed, or subsidized by the People’s Republic of China.”

With this law, alone, it’s doubtful the U.S. government would allow a state-run Chinese company to purchase Micron Technology, which is a key supplier of computer chips.

The CCP wasn’t happy about the new law. On the same day the federal budget was signed on Jan. 17, 2014, the Chinese Ministry of Commerce released a statement saying the law would “have a negative effect on Chinese companies,” and would harm the “interests” of U.S. companies.

As things stand now, however, American companies would have little to lose if the U.S. government were to step in and block the rumored Micron Technology sale.

U.S. companies will be left with two choices: hand over the keys to their products and allow the CCP to spy on their users, or get out of China.

The CCP recently passed a “national security law” that extends the power of the ruling party to nearly every facet of Chinese society. Included is a new rule that all network infrastructure and information systems in China need to be “secure and controllable.”

According to the United States–China Economic and Security Review Commission, the new rules “would require any company operating in China to turn over to the government its computer code and encryption keys, as well as provide a backdoor entry into commercial computer networks.”

In other words, U.S. companies will be left with two choices: hand over the keys to their products and allow the CCP to spy on their users, or get out of China.

The new law is part of a cocktail of similar laws the CCP is now rolling out. A “cybersecurity law” it passed on July 8 gives the CCP greater control over the Internet and technology industries, while giving domestic Chinese companies an edge over foreign companies.

Part of the cybersecurity law will make foreign technology companies hand over their design specifications to the Chinese regime. Due to parts of the law designed to track down religious believers and political activists, as Epoch Times reported, companies that stay in China will also likely run into scrutiny from concerned shareholders and public stakeholders for participating in programs that violate human rights.

Among the new laws still expected in China is one that places foreign nongovernmental organizations under the command of the CCP’s Ministry of Public Security, and a “counterterrorism law” that will deepen the CCP’s spying programs on electronics.

Facing an environment in China that is becoming increasingly hostile to U.S. technology companies, coupled with the fact that allowing the CCP to purchase a U.S. company that supplies key parts to American computers and electronics, the chances of the Micron Technology sale going through are significantly slim.

And last, but not least, there is a long and strange history of electronics from China being found with security threats installed at the factory level.

Incidents on the extensive list have ranged from infected Xiaomi cellphones that can spy on users, to gray market SanDisk and Kingston memory cards, and to the 2014 incident when handheld scanners sold by a Chinese company were found with infections meant to spy on the global shipping industry.

Is Your Iron Spying on You?

There was a little-reported statement from Greg Schaffer on July 8, 2011, who at the time worked in the cybersecurity office of the Department of Homeland Security. While testifying before Congress, he was asked if there were any risks of having electronics manufactured overseas.

Schaffer said he knew of cases where electronics manufactured in other countries were infected at the factory level, stating “We believe there is significant risk in the area of supply chain.”

He said, “This is one of the most complicated and difficult challenges that we have.”