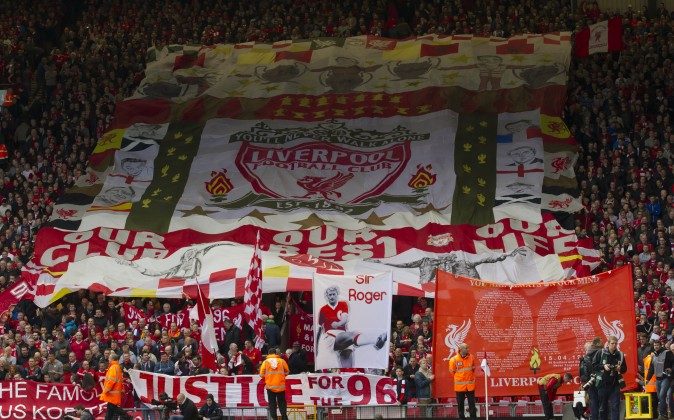 Liverpool supporters hold banners prior to a minute's silence in tribute to the 96 supporters who lost their lives in the Hillsborough disaster of 25 years ago on 15 April 1989, Liverpool, England, Sunday April 13, 2014. (AP Photo/Jon Super)
UK

It was a day that left dozens of football fans and their family members crushed; literally.

On April 15, 1989, 96 football fans died from being crushed to the point of asphyxiation during an FA Cup semi-final at Hillsborough Stadium between Liverpool and Nottingham Forest.

All but three victims suffered compression asphyxia; some dying as early as 2:57 p.m. on the day of the match, with the 96th victim—Tony Bland—dying in 1993 after suffering a brain injury at Hillsborough.

The coroner believed all 96 who died suffered fatal injuries prior to 3:15 p.m., according to the BBC.

On April 26, a jury concluded police mis-duty, as well as the match commander’s “gross negligence” were responsible for the horrifying injuries and fatalities, according to the BBC.

Findings also included: Police and ambulance response was “slow and uncoordinated,” the stadium suffered safety and design defects, match ticket information was misleading, failure of commanding officers allowed for the terrace rush, police failure to control the Leppings Lane turnstiles, and officials should have delayed kick-off due to massive fan gatherings outside.

During the inquest in Warrington, Cheshire, the nine jurors reached unanimous decisions on 13 of the 14 questions; seven of nine jurors agreed that the fans were killed unlawfully—and, although not unanimous, the coroner said he’d accept a majority in this ruling, according to the BBC.

The rulings gave family members, who have been fighting a 27-year-long battle, a satisfactory conclusion. As jury members exited the courtroom, they were greeted with applause from the public and standing ovations.

Chief Constable of South Yorkshire Police, David Crompton, apologized to the families of the victims. See the apology via The Guardian in the video below: