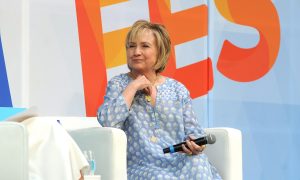 Clinton used the opportunity to express divisive views on race relations, the Trump administration, and her stunning election loss in 2016. She also primed a “voter suppression” narrative to the mostly black audience.

“We are living through a full-fledged crisis in our democracy,” Clinton said, in reference to the Trump administration during a ceremonial breakfast where she was ironically given a 2019 International Unity Award.

Clinton added that “racist and white supremacist views are lifted up in the media and in the White House.”

Later in the day, she told listeners at a service at the Brown Chapel African Methodist Episcopal Church that their fellow Americans are actively trying to victimize them.

“I want you to never forget, there is another side in America, and they never give up. They never quit. They are never discouraged. They are motivated every single day to try to pull back rights, to try to suppress rights, to try to prevent people from fulfilling their own God-given potential,” Clinton said.

She also claimed that her 2016 presidential loss was due to people being blocked from voting in Wisconsin due to “the color of their skin.” Clinton famously never visited Wisconsin during her presidential campaign.

“I was the first person who ran for president without the protection of the Voting Rights Act,” Clinton said, adding “it made a difference in Wisconsin where the best studies that have been done said somewhere between 40,000 and 80,000 people were turned away from the polls because of the color of their skin, because of their age, because of whatever excuse could be made up to stop a fellow American citizen from voting.”

In 2011, Wisconsin passed a strict photo voter identification law that Democrats challenged on the grounds that it suppresses minority votes. But in August 2016, months before the general election, a federal appeals court ruled that the law was constitutional as long as the state provides free IDs to those in need, and sufficiently publicizes the requirement.

Wisconsin is one of seven states with a strict photo voter ID law, while 35 states require varying degrees of identification to vote, according to the National Conference of State Legislatures.

The Wisconsin Elections Commission also accepts a broad range of identifying documents, including a state driver’s license, ID card or other DMV-issued document, a military or veteran’s ID, student ID, tribal ID, or certificates of naturalization. Voters can also cast a provisional ballot at the polls and retrieve identification up to four days after an election.

“Your photo ID does not need to have your current address, and your name on your ID does not have to exactly match the name on the poll list,” Meagan Wolfe, interim administrator of the Wisconsin Elections Commission, said in a recent statement.

In February, an academic study published by the National Bureau of Economic Research further expounds that strict voter identification laws do not stop people from voting in U.S. elections.

Researchers Enrico Cantoni of the University of Bologna and Vincent Pons of Harvard Business School analyzed elections spanning eight years, using a methodology involving 1.3 billion voting observations, and concluded that strict voter ID laws have “no negative effect” on voter registration or voter turnout—either overall or for any specific group, whether defined by race, gender, age, or party affiliation.

Clinton lost Wisconsin by 22,748 votes in 2016, with many African American voters in traditional Democratic strongholds like the city of Milwaukee staying home after voting in record numbers for President Obama.

However, she also blamed the U.S. Supreme Court for gutting the 1965 Voting Rights Act, which was passed the same year as the Selma, Alabama bridge crossing. Clinton said Republicans “found a receptive Supreme Court who came up with the most absurd decision,” referring to the 2013 Shelby v. Holder ruling.

In truth, the court did not effectively repeal the Voting Rights Act but determined that the original coverage formula for determining which voting jurisdictions are subject to federal oversight, known as pre-clearance, was no longer valid—nearly a half-century later.

According to Hans von Spakovsky, a former FEC commissioner and senior legal fellow at the conservative Heritage Foundation, the Shelby ruling was a sign of “overwhelming success of the Voting Rights Act.”

“No one can rationally claim that there is still widespread, official discrimination in the Southern states of the former Confederacy that were the initial target of the Voting Rights Act, or in any other parts of the country, for that matter,” he wrote on the 50th anniversary of the landmark voting legislation.

But the theme of voter suppression still resonated during the 2018 midterms and looks to be a top campaign issue ahead of the 2020 elections.

Abrams, a Democrat, would have been Georgia’s first African American governor. She didn’t officially end her campaign until 10 days after Nov. 6, and has since sued over the election result alleging systematic voter suppression.

“We know, don’t we, that candidates both black and white lost their races because they have been deprived of the votes they otherwise would have gotten,” Clinton said. “And the clearest example is from next door in Georgia. Stacy Abrams should be the governor leading that state right now.”

Abrams has based her career on voter suppression, and appears to be forging a way forward on the issue to the benefit of the Democratic Party.

Abrams was elected to the Georgia House of Representatives in 2007 and remained a relatively obscure figure until receiving a funding windfall of $12.5 million in 2016 through two voter registration nonprofits.

She has consistently resisted identifying the sources of the funding, although she once thanked billionaire financier George Soros in an interview.

In the lead-up to her 2018 election, Abrams organized a statewide voter registration drive known as the New Georgia Project, which also relied on wealthy out-of-state progressive donors.

More recently, a PAC known as “Fair Fight Action” was reorganized to expand Abrams’s so-called “dark money” operations. Dark money refers to political spending where donors are not disclosed and sources of funding are unknown.

Abrams has said she will announce whether she will run for a U.S. Senate seat in Georgia sometime in March. Meanwhile, her Fair Fight Action PAC has financed a website called Fair Fight Georgia, which asserts that “elections in Georgia, and throughout much of our country, are not fair.”

Regarding 2020, Clinton said, “So we’re looking toward a new presidential election, thank goodness, but it’s not going to make a difference if we don’t bring the lawsuits and win them, right?”