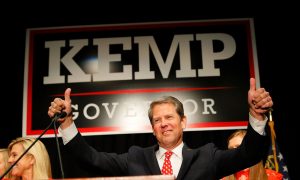 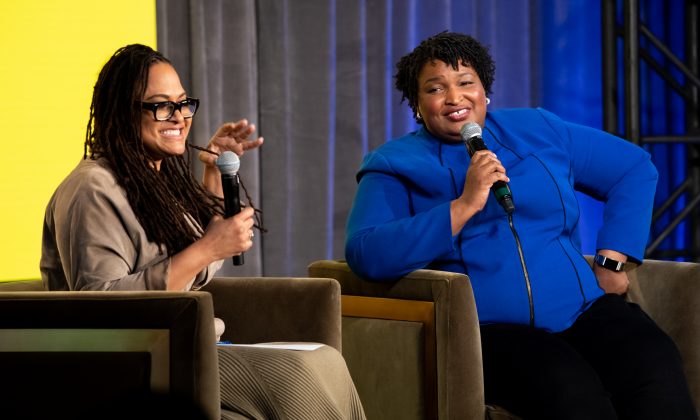 Stacey Abrams may have lost the 2018 election for governor of Georgia but the former Democratic state lawmaker is eyeing higher elected offices, including a U.S. Senate seat in 2020.

In a Jan. 26 MSNBC interview with activist Al Sharpton, Abrams said she hasn’t decided which office she’ll pursue next, but to expect an announcement by March 31.

Sharpton introduced Abrams as “a star of the Democratic Party.” Regarding a Senate bid, Abrams said she is considering “if it’s the right job for the work she wants to do.”

Sharpton then pivoted to voter suppression, an issue at the center of Abrams’s career and what she has blamed for her midterm election loss after current Georgia Gov. Brian Kemp, a Republican, won the seat.

“We know we did not have a fair fight in Georgia. That’s why I created Fair Fight Action, which is an organization dedicated to pushing voting rights for everyone,” Abrams said.

But Fair Fight Action has also been identified as a so-called “dark money” organization. Dark money refers to political spending where donors are not disclosed and sources of funding are unknown.

According to the Center for Responsive Politics, dark money groups are responsible for a “staggering gap” in tracking how political spending impacts elections—and arguably makes them unfair.

Documents filed with the Georgia Secretary of State show that Abrams is now expanding her dark money operations.

She was listed as Fair Fight Action’s chief executive in December, with the organization itself being created by restructuring and rebranding another Abrams dark money group, as first reported by the Daily Beast.

Fair Fight Action was formerly called the Voter Access Initiative but a name change occurred on Dec. 14. The tax-exempt nonprofit’s existing articles of incorporation were also amended to allow for greater political activity.

Previously, the Voter Access Initiative was prohibited from “directly or indirectly” participating or intervening in “any political campaign on behalf of any candidate for public office.” But that is no longer the case.

Among other activities, Fair Fight Action is now able to donate to super PACs that can support or attack specific candidates, potentially paving the way for Abrams to challenge Georgia’s incumbent Republican Sen. David Perdue in 2020.

Abrams’s 2018 gubernatorial effort would have made her the nation’s first black female governor in the nation’s history. She lost by only 17,000 votes to Kemp, who served as Georgia’s Secretary of State from 2010 until Nov. 8, 2018, or two days after the polls closed.

As the state’s chief elections officer, Kemp was responsible for the state’s election integrity procedures. Abrams accused him of purging thousands of minority voters from voter rolls, while Kemp maintained that incorrect voter registrations and those lacking sufficient identification were properly moved to “pending” status.

Citing election abuses, Abrams didn’t officially end her campaign until 10 days after Nov. 6, although she has continued a public relations campaign of sorts.

With the help of outside counsel, Abrams immediately filed a federal lawsuit alleging systematic voter suppression in the election.

Fair Fight Action then financed a website called Fair Fight Georgia which asserts that “elections in Georgia, and throughout much of our country, are not fair.” The site features Abrams prominently but in a disclaimer states that it is “not authorized by any candidate or candidate’s committee.”

Voter suppression is a message that resonates with many Georgia voters, as evidenced by Abrams earning more total votes than any Democrat in the state’s history.

Through her campaign, associated dark money groups, and the state Democratic Party, she raised an unprecedented $42 million last year.

“That includes $26 million collected directly by Abrams’s campaign before the election, as well as another $2 million she raised in the 10 days after the vote but before she abandoned her bid,” according to the Atlanta Journal Constitution.

The money was largely spent on hundreds of staffers and canvassers, media attack ads, and lawyers.

Abrams’s affiliation with dark money nonprofits and political action committees is very much a part of her political ascendance from backbench status in the Georgia Legislature to becoming a national Democratic Party star with elite aspirations.

Abrams was elected to state House District 89 in 2007. But in 2014, she began receiving a massive influx of unforeseen political donations.

To date, Abrams has refused to acknowledge where the donations come from, although she has personally benefitted to the tune of nearly half a million dollars.

Prior to 2018, Third Sector Development organized a statewide voter registration drive known as the New Georgia Project. The effort relied on support from wealthy progressive donors who continued giving millions to Abrams during her run for governor.

The New Georgia Project was investigated for fraud by the State Board of Elections and the group’s lack of transparency caused concern even among many Democrats.

In a March 2018 interview, Abrams acknowledged that George Soros was an early anchor donor.

“George Soros and the Soros family have demonstrated nothing but deep investment and commitment to social justice. That is how I came to know them because they were early investors in the New Georgia Project,” she said.