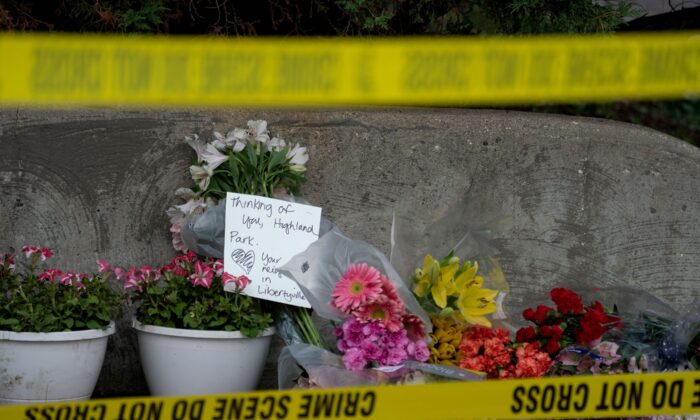 Flowers are left for victims of the 4th of July mass shooting in downtown Highland Park, Ill., on July 5, 2022. (Max Herman/AFP via Getty Images)
Viewpoints

The Highland Park massacre near Chicago is the latest horrific chapter in a long and evil story. Some want you to believe it’s a story about why we need gun control. The truth is that it’s a story about letting the insane out of the asylums—and it suggests that gun control laws, including much-hyped “red flag” provisions, simply don’t and will never work.

Want evidence? In the past 50 years, the percentage of households in the United States owning at least one firearm has gone down. You heard right: Gun ownership dropped to 42 percent in 2021 from 43 percent in 1972. At the same time, the average number of deaths from mass shootings increased 600 percent, to 51 between 2010 to 2019 from eight per year in the 1970s.

Obviously, guns aren’t the problem. So what’s really going on?

Here’s the real story. From 1960 to 1964, there was not a single notable mass shooting in the United States. Then do-gooders decided on “deinstitutionalization”—that is, to simply release virtually all of the mentally ill into American society. The American Civil Liberties Union (ACLU) spearheaded the campaign, which ultimately led to a key ruling by the Supreme Court forbidding states from locking up anyone who is “non-dangerous.”

Then, of course, the ACLU decided virtually every mentally ill person in the country was “non-dangerous.” Since the 1960s, more than 9 in 10 mental patients were sprung from asylums, whose capacity dropped from nearly 600,000 patients to less than a tenth of that amount.

As we emptied out America’s insane asylums, mentally ill people began killing Americans en masse. The Secret Service has found that a quarter of mass murderers in 2017 had been hospitalized for psychiatric treatment or prescribed psychiatric medication before their attacks, a third were actually psychotic, and nearly two-thirds “experienced mental health symptoms prior to their attack.” A comprehensive study of mass killers for a century found a quarter of those studied were mentally ill—but after deinstitutionalization, between 2000 and 2015, the proportion rose to 32 percent. Even the left-leaning Mother Jones found that among mass shooters, “a majority were mentally ill—and many displayed signs of it before setting out to kill.”

Overall, a summary of mass murder studies reports that in the results “we see the full effects of the closing of state mental hospitals and reduction of community psychiatric services.”

Note that while these “reforms” cut short ever-more Americans’ lives, they arguably short-changed ever-more mental patients’ lives as well. The closing of those state mental hospitals not only led to gravestones of murder victims, but also to mass homelessness that persists to this day. According to one peer-reviewed study, after the former all-time peak in hobos during the Great Depression, by the 1960s, homelessness had declined to the point that researchers predicted its virtual disappearance. Instead, as asylums emptied, homeless shelters filled.

Not only homeless shelters, but prisons filled as well. In effect, deinstitutionalization achieved the transfer of those who should have been confined for their own safety and that of others to prison—after having committed a crime, up to and including mass murder. Before the turn of the last century, severely mentally ill inmates constituted less than 1 in 100 of the American prison population, but that rate has increased 10-fold. In particular, 1 in 10 of all inmates imprisoned for any homicide now has severe mental illness.

Which brings us to Highland Park.

You decide: In Illinois, a state that already has a so-called red flag law—which didn’t work—was there instead sufficient evidence that the alleged killer should have been confined for his safety and that of his fellow Americans?

There is ample evidence that police were aware of problems in the household before the alleged shooter’s troubles began. Police were reportedly called to his home at least nine times between 2010 and 2014 in response to alleged domestic disputes, police records say, mostly between the suspect’s parents.

There is even more evidence that the suspect was anything but “non-dangerous,” to himself or others. One of the alleged shooter’s friends says she reached out to his father on Facebook around 2015 after he “said some concerning things about wanting to overdose.”

The alleged killer reportedly threatened suicide and allegedly tried to kill himself multiple times as early as 2016. In particular, in April 2019, the suspect “attempted to commit suicide by machete” and had a “history of attempts” to kill himself, according to another police report (pdf). Just five months later, in September 2019, the Highland Park Police Department determined the alleged shooter posed a “clear and present danger” after allegedly threatening to “kill everyone” in his family. Yet the police simply removed a 24-inch Samurai sword, a dagger, and 16 knives from his room, and even returned those to his father afterward.

In the suspect’s online activity, he appeared obsessed with violent imagery, mass shootings, and high-profile murderers. His “shocking” music videos reportedly included an animation of a gunman being killed by police and another with him in an empty classroom dressed in tactical gear. He reportedly posted a beheading video on a message board he frequented that was devoted to death. Finally, 13 hours before the Highland Park mass shooting, the suspect brought up the 22-year-old Danish man who had shot and killed three people at a mall outside Copenhagen that day.

Again, you tell me: In a home police were well aware had a history of domestic disturbances, there was an individual who police also knew had a long history of suicidal actions, and whom police also determined at one point posed a “clear and present danger” to himself and his family—so why, exactly, was he never committed?

The answer is because virtually no one in America can be committed anymore. Police, generally speaking, don’t even try.

It’s crazy to try to prevent mass shootings by taking away sane people’s guns. The problem is those who dismantled commitment for the mentally ill, as well as those who now refuse to consider rebuilding it—and those crazy enough to believe the left’s lies about gun control.