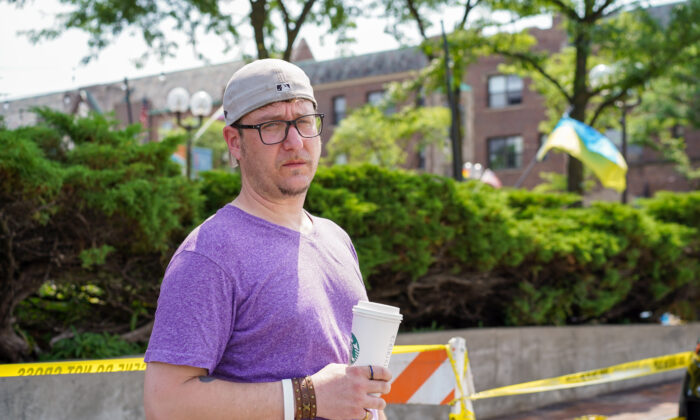 Illinois Town in Mourning After Mass Shooting at July 4 Parade

HIGHLAND PARK, Ill.—Morgan Moss, a lifelong resident of Highland Park, Illinois, couldn’t sleep the night of July 4. On the morning of July 5, he went back downtown and quietly walked around the crime scene.

He was in the Fourth of July parade driving a company bus when a gunman began randomly shooting at the crowd from a rooftop. After opening the bus door to let a dozen parade-goers in, he took a side road and drove them to a safe location.

Later, a coworker showed him footage of a victim killed at the parade and that image stayed with him. The massacre claimed seven lives and left dozens more wounded.

It shocked him, even more, when he learned who the suspect was—Robert Crimo III, the son of a well-known former business owner and mayoral candidate in the close-knit, affluent town. Crimo, who was taken into custody without incident, has been charged with seven counts of first-degree murder, local officials said on July 5.

“As time progresses, wounds heal, but we must learn from mistakes, too,” Moss told The Epoch Times. “I’m talking about doing something about young men who keep shooting up places across America time and time again.”

He wants more mental health support for these young men, as well as more focused monitoring of social media to prevent tragedies like what happened in his town. Crimo had posted violent content online before the attack.

Jamie Draper and Joanna Dolins, both Jewish residents, told The Epoch Times that it’s heartbreaking to see such a tragedy in their hometown.

It’s the first time that a mass shooting has erupted in this affluent town north of Chicago. About a third of the town’s population is Jewish.

“Here, almost everybody knows everybody, and kids grow up with all the resources and advantages. Nowadays, it seems like anything could happen any time in any place,” Draper said.

The shooting has changed him a bit, Draper said. Now, when he goes out, he’s more alert about potential dangers.

“The suspect got into trouble breaking the law before, and people in town know about that,” he said. “I just hope that more will be done to prevent things like this from happening again.”

He supported the town’s ban on rifles (such as AR-15s) in 2013. The ban faced legal challenges all the way up to the U.S. Supreme Court, which ultimately declined to hear the challenge in 2015.

“This is a very safe town. Nothing ever happened. It just goes to show that this isn’t a problem of Highland Park or Chicago. This is a problem of the United States of America,” she said.

Dave, a 63-year-old resident who declined to give his last name, said that he thinks it’s more important to focus on mental health issues than guns.

“When I grew up, we didn’t have internet or social media. But now kids get to see all kinds of ugly things online, and sometimes it is even hard for their parents to know what’s going on,” he said.

Benny Roberts, a visitor from northern Indiana, made a cross and carried it to Highland Park on July 5.