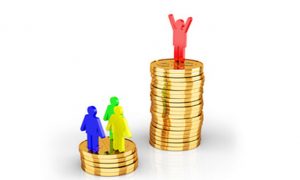 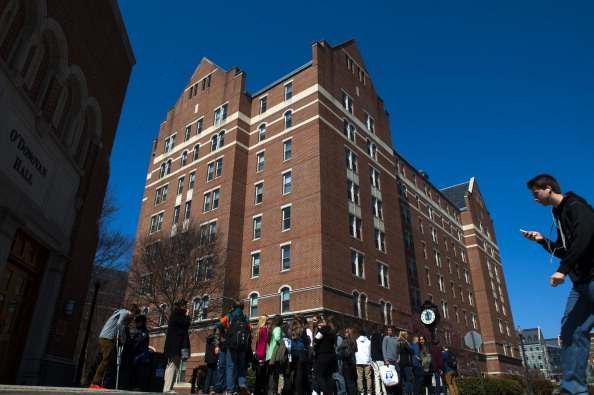 WASHINGTON, DC - MARCH 20, 2014: A student walks by the McCarthy Hall, dormitory on the Georgetown University campus. (Photo by Katherine Frey/The Washington Post via Getty Images)
US

WASHINGTON—In a new book, “Degrees of Inequality: How the Politics of Higher Education Sabotaged the American Dream,” Cornell University professor Suzanne Mettler wrote that although the United States used to be the world leader in higher education with respect to graduation rates and lower- and middle-income student access, that’s no longer true.

Rising tuition, political polarization in Washington, reduced budgets in the states, federal education policy “drift,” and the rise of for-profit universities and colleges have all played a role in negatively impacting graduation rates and access to higher education over the last 40 years.

Our higher education system is not effectively reducing inequality, but instead it perpetuates inequality, according to Mettler.

Before World War II, higher education was mainly for the privileged. From the mid-20th century to the 1970s when Pell grants were introduced, higher education in public universities and colleges had enabled many from disadvantaged backgrounds to obtain four-year degrees—and the realization of the American dream.

Mettler said her research found that those veterans who went to college on the G.I. Bill were later in life more involved with civic organizations and were much more politically active than veterans of similar backgrounds who did not use the G.I. Bill. In other words, this legislation enabling persons to go to college who otherwise would not have gone also served an important national purpose, enabling the country to more fully live up to its ideals.

Speaking at the New America Foundation on March 27, Mettler said, “I think we are at a point where we need to step back and think big about the purposes of higher education and about why government should be having a role in it.”

Mettler cited gloomy statistics from her book. The proportion of students who graduated from a four-year college by age 24 correlated highly with family income.Breaking the income distribution into four quartiles, only 1 out of 10 students attained graduation from the lowest income quartile. The next quartile was not much better, at 15 percent graduation. For the top income quartile, 71 percent graduated. The data is from Thomas Mortenson, “Family Income and Unequal Educational Opportunity,” 1970–2011.

Further, the data indicates that progress since 1970 has been almost nonexistent for the lower quartiles. The college graduation rate for the lowest quartile in 1970 was 6 percent, which showed little improvement to 10 percent in 2011. For the next income quartile, the rate increased by very little between 1970 and 2011, from 11 to 15 percent. But for the highest income quartile, graduation rates increased from 40 percent in 1970 to 71 percent in 2011.

In an interview with the Epoch Times, Dr. Douglas Besharov, professor at the University of Maryland’s School of Public Policy and a senior fellow at the Atlantic Council, said that the motivation for seeking a college degree among middle class kids changed over the decades with their realization that with a college degree, earnings are much better than before.

Mettler is careful not to lay blame solely on the skyrocketing tuition rate hikes. She said that public policies are “far less effective than in the mid-20th century in ameliorating inequality in college-going.” Mettler referred to a “policy drift” in lawmakers addressing the needs of higher education in recent years.

Although the size of Pell grants—aid based on need that does not have to be repaid—have increased since 2007, their purchasing power is far less than it was in the 1970s. “The value of the maximum grant award in covering the cost of tuition, fees, room, and board at the average four-year public university has fallen from nearly 80 percent in the 1970s to only 31 percent in 2012–2013,” she wrote.

Pell grants need automatic cost-of-living adjustments. But due to rancor and partisan polarization in Congress, issues like these don’t get discussed, and “public policy maintenance” deteriorates.

Mettler said that the decline of moderates, especially in the Republican Party, and the greater homogeneity in both parties across issues have led to stalemates in policy management. Even within small issues such as amendments to the Higher Education Act, she said, there is a wide gap between Democrats and Republicans.

States Not Stepping Up

One major factor that is hurting college attendance and graduation rates is that the states are not placing commitment to higher education at the same priority as in the past, according to Mettler.

On average, during the period from 1990–91 to 2009–10, states decreased funding by 26 percent in public colleges and universities, even as operating costs increased. These are the universities and community colleges that are most affordable—where 73 percent of students attend. Yet to the dismay of students, they have witnessed dramatically rising tuition. For public four-year institutions, tuition rose by 244 percent from the period 1980–81 to 2010–11.

Mettler said that there is a “perverse incentive” among states to step back with the expectation that the federal government will come forward with more funding to ameliorate the problem. Since 2007 when Pell grants were increased, the federal government has been doing “the heavy lifting,” while the states and institutions tend to take a backseat.

To make up the budget gap, states save money by placing more students in the classroom and more classes online. More impersonal teaching and less individual student attention hurt college graduation rates and is particularly problematic for students with “less advantaged backgrounds,” she said.

The rise of for-profit universities and colleges, such as Corinthian Colleges, Kaplan, and the University of Phoenix, has not helped the higher education system, according to Mettler. This sector has grown phenomenally from 226,818 in 1993 to over 2 million in 2010, becoming “vast multistate enterprises.”

Mettler does not question that for-profit institutions do education differently from a traditional university and that they have reached out to low-income students. But Mettler approaches the topic from the standpoint of results: ultimately, what are for-profits contributing to graduation rates, reducing inequality, and student debt burden.

“The problem is that the outcomes are really poor,” she said.

Not surprisingly, the average student loan debt at the for-profit sector is much higher compared to other colleges and universities, with a median student debt of $32,700.

Three years after graduation, 23 percent of graduates cannot keep up with payments and must default. The degree evidently was not good for securing a job that would enable the student to pay off the loan, according to Mettler.

For-profit college students constitute 13 percent of enrollees at colleges and universities, yet they account for about 25 percent of the federal student aid dollars and nearly one-half (47 percent) of federal loan defaults. When Congress makes available more student aid, the for-profits notably increase tuition, she said.

For-profit colleges are “allowed to receive up to 90 percent of their revenue from the Higher Education Act of 1965, Title IV … and that doesn’t count whether they are able to get funding from the G.I. Bill and other programs,” Mettler said.

Besharov said that the for-profits tend to have less-prepared students, who otherwise would not have a chance at anything. Because they are less prepared, they have a higher dropout rate compared to the public colleges and universities.

But he said, “There is no question that some number of these [for-profit] schools, especially the ones that provide education and assistance on a profession where there is a demand for workers, they do well.”