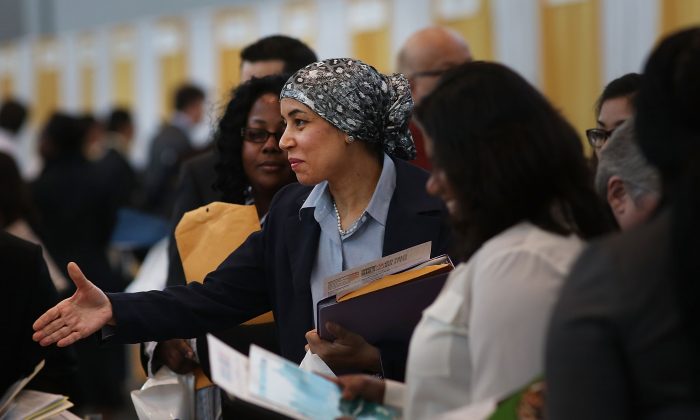 The May jobs report reveals high youth unemployment, which experts say is a national problem that need more attention.

While unemployment nationally rose just a bit, to 7.6 percent, unemployment for younger workers, ages 18 to 29 remains problematically high at 11.6 percent.

To makes matters worse that percentage does not represent the total number youth out of work.

According to millennial advocacy group Generation Opportunity, around 5 percent of youth have left the job market and are no longer actively looking for a job. Thus the number of unemployed young people is closer to 16 percent.

President of Generation Opportunity Evan Feinberg says youth unemployment is a problem that needs immediate attention. Not working in your twenties can suppress wages for years to come, said Feinberg, citing a study from the University of Bristol.

Feinberg says young people need meaningful, career-oriented jobs and they are not finding them.

One Rutgers study found 35 percent of recent college graduates were neither continuing their schooling nor working full time. A Measure of America study of youth 16 to 24 found that as many as one in seven, or 5.8 million young people are “disconnected” from society, meaning they are not in school and not working.

In New York, one in five African-American and Latino youth are disconnected, according to the above study, which was published September 2012. These young men and women are disengaged from experiences of learning and growing that bring confidence and purpose. They are not using their youth to lay a foundation for future employment.

Related discussion: Are the Fed’s attempts to boost the economy making things better?

“We have to think critically as a city, what this means for our future as a city,” said Brooke Richie-Babbage director of the Resilience Advocacy Project, which works to strengthen poor youth so they can rise out of poverty.

“Five years down the line when they are 26 and employers expect them to have 6-7 years of work experience and they don’t, they are even further behind,” said Richie-Babbage, who spoke June 5 at a rally on the steps of City Hall to push for more funding for youth unemployment programs.

New York State and City operate work experience programs to help youth. Particularly poorer youth in greater need of a boost to step out of poverty.

New York’s Department of Youth and Community Development’s (DYCD) runs a Summer Youth Employment Program, a Young Adult Internship Program, an Out-of-School Youth and an In School Youth Program. Two of the programs are directed at unemployed youth not attending school.

However, these jobs programs don’t come close to meeting the need says a new report from community group FUREEous Youth and the Urban Justice Center.

Each of the last three years the summer employment program was unable to place 100,000 youth who applied for positions. Some programs served far fewer youth, as few as 1,000 or less.

FUREEous Youth wants to see existing job training programs offer more slots to these youth and wants better advertising for the programs so more youth know of the opportunity.

The jobs report also calls for career advisors and work study programs to be set up in high schools to help guide students for the transition into the workforce.

Struggling youth with blank resumes benefit most from this opportunity for work experience. Even a little work experience can be a boost that leads to a job.

For Eric Valentin Jr., who spent three summers working through New York City’s Summer Youth Employment Program, is currently working in daycare. Valentine said the experience taught him to how to interact with parents and it helped him land a job after high school.

Valentin thinks the employment programs are valuable. “Young people have to take the initiative and these programs help them take that initiative,.” he said