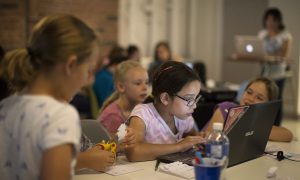 High-Tech Entrepreneurship Heats up in Canada

A revival in Canadian high tech is underway.

Not just about natural resources anymore, Canadians are emerging from the shadows cast by fallen giants Nortel and BlackBerry to create new tech companies backed by entrepreneurial ecosystems that garner international adulation.

Millennials, who watched the tech bubble burst, are leading the charge. The old days of hacking it out in the garage have given way to venture capital dollars, innovation hubs, and accelerators—a growing suite of services built through partnerships between government, businesses, and universities.

Governments, desperate for GDP growth, are turning to small businesses, which comprise 99 percent of the country’s businesses, to fire up the economic engine.

The results are starting to show. Shopify’s landmark IPO in May valued the Ottawa-headquartered firm at US$1.27 billion.

The payoff is jobs and a stronger economy. For entrepreneurs looking beyond the 9-to-5, the payoff is making an impact and enjoying the tantalizing prospect of creating the next Facebook or Instagram.

The quality of the entrepreneurs has never been stronger.
— Salim Teja, MaRS
Perhaps nowhere is the spirit of entrepreneurship and collaboration more evident than at MaRS Discovery District—an “innovation hub” in downtown Toronto. MaRS is a charitable organization that plays an important role in the ecosystem—or community—of high-tech start-ups.

“The quality of the entrepreneurs has never been stronger. The types of ideas they’re coming up with are just unbelievable,” says Salim Teja, the EVP Ventures for MaRS, sitting at a table near the organization’s cavernous reception area. He points to the numerous floors of the structure housing start-ups at various stages of development.

The MaRS venture services group is focused on growing promising start-ups. The key is to help founders understand how to run businesses, gain access to clients, and find suitable talent to grow their companies.

“We want to make sure we are catching these companies that are on that growth trajectory,” Teja says.

Teja talks about “collisions”—collisions between the entrepreneurs, with academics, with investors, and with policymakers. It’s a key feature of MaRS to be able to bring these diverse people together under one roof. It’s creating community. “Collisions turn into interesting opportunities,” says Teja.

I call it an ‘explosion of entrepreneurship throughout our higher education systems.’
— Professor Howard Armitage, University of Waterloo
Other thriving ecosystems exist in Canada too—most notably in Vancouver and Waterloo. And this does not even include the ecosystem in Ottawa’s Byward Market adjacent to the Parliament buildings that Shopify calls home.

In fact, Canada has three cities (Toronto, Vancouver, and Waterloo) in the top 20 tech ecosystems in the world, according to Startup Genome.

Spending time in Silicon Valley, the world’s foremost tech ecosystem, was an invaluable experience for Andrew D’Souza, 30, a University of Waterloo engineering graduate and tech entrepreneur. D’Souza was formerly president of Nymi, a company creating a vision around seamless identity.

After spending a couple of years as a strategy consultant, D’Souza wanted to get back to his engineering roots—building. He could either have stayed on the established side and continued to try to help steer the corporate vessel or be on the side creating the massive shift in the way people and companies operate.

“It was going to be more fun to be on the disrupting side of this ecosystem,” says D’Souza at Toronto’s Soho House in early May.

While the term “disrupting” might have negative connotations in almost any other industry, in tech it’s key to survival. It’s innovation that makes old products or businesses obsolete.

After moving to San Francisco in 2010 to join a start-up, he quickly got plugged into the ecosystem and found many other like-minded people working at places like Google, Facebook, or starting their own companies.

“Everybody is just one or two degrees away from somebody who is or had a massive success. You see it, it’s in their face,” explains D’Souza enthusiastically.

“It’s creating that attitude of helping each other, essentially going outside and spending time making useful connections, because it’s just good for the ecosystem,” D’Souza says. “People want to have a hand in helping create the next great success.”

D’Souza is one of many Canadian entrepreneurs who have spent time in Silicon Valley and then brought back to Canada that invaluable experience. Teja is another.

With a mass of talented people who have been working in tech for years, the art of entrepreneurship and starting a company has become, to some extent, a well mapped-out process.

And universities in Canada are producing world-class talent that is keen to follow the path blazed by companies like Shopify or Hootsuite. A prime example is the University of Waterloo (UW), well known internationally for its math and engineering programs. It’s Google’s top school in Canada for recruitment.

Professor Howard Armitage says that over the past decade entrepreneurship has gone from being something that was happening at the margins of Canadian universities to becoming one of their primary focuses.

He recalls founding UW’s Conrad Business, Entrepreneurship and Technology Centre in 2002 in response to a challenge from then school president and now Canada’s Governor General David Johnston.

“He basically said to the university campus, ‘I would like to take the University of Waterloo, which is a very well-known university, into being an extremely well-recognized university at the international level. What would be some of the ways in which we could do this?'” Armitage tells Epoch Times.

It’s creating that attitude of helping each other.
— Andrew D'Souza
But universities are ultimately serving a need for today’s students who could be the first generation to understand that their standard of living may not be as high as that of their parents. The tech bubble bursting in the early part of last decade, and more significantly the financial crisis that began in late 2008, are believed to be watershed events that shaped the psyche of today’s young adults. There’s a recognition that the typical 9-to-5 job is disappearing and things are not business as it used to be.

“Canada’s standard of living as a whole will likely be enhanced only by those who are taking innovative steps to create new products and services, new processes, and they [the students] want to be part of it,” Armitage says.

“I see students that are coming in with that entrepreneurial flavour. They want to understand what it is, how they can contribute, what’s the methodology by which they can begin to generate ideas and move ideas,

“I call it an ‘explosion of entrepreneurship throughout our higher education systems.'”

Clearly the motivation of the millennials and Generation Z feeds into the growth of entrepreneurship in Canada. The work-life divide is blurred for them; the work they do has to be meaningful, and it can be done at any time of the day.

D’Souza figures he probably puts in more time now than his 80+ hour weeks as a strategy consultant.

“It just doesn’t feel like work as much, that’s what I found,” D’Souza says. “No demarcation between work life and personal life, and I’m ok with that.”

“I want to enjoy my life and create experiences now and not put these off until I pay my dues,” he says.

Government Getting It Right

Teja calls the creation of MaRS in 2005 “very forward thinking,” but government has also taken the right steps with the Venture Capital Action Plan (VCAP), launched in January 2013, and its Canada Accelerator and Incubator Program (CAIP).

Since 2009, over 350 companies have taken part in Canada’s CTA program. A recent success was Vancouver’s Ayogo Health.

“The CTA experience was extremely valuable, and in particular the staff [both in the Bay Area and in Boston] helped us make key connections that opened several new business opportunities,” said Ayogo Health’s CEO Michael Fergusson in a press release.

Promising companies used to have to go to the U.S. for later rounds of funding, with ownership eventually becoming American. But it’s beginning to look like Canada can serve this function on its own now and build and fund its own world-class companies.

OMERS Ventures, the venture capital arm of one of Canada’s largest pension funds (over $65 billion in assets) has invested $250 million in 22 Canadian information and communications technology (ICT) and media companies since 2011.

Filling ICT Jobs Crucial for Canada’s Economic Growth
In fact, Canada is also attracting increasing amounts of foreign venture capital money. According to PitchBook, a research and data provider to professionals in the private financial markets, 2014 was the first year that more U.S. VC firms than domestic VC firms invested in Canada. The $1.8 billion invested last year was a new record.

There are now more angel investors in Canada providing the critical initial funding for start-ups. In years past, these investors tended to be conservative wealthy professionals such as doctors or lawyers who had far less knowledge of developing small businesses, but now they are a more sophisticated lot having had actual experience creating their own companies.

Successful entrepreneurs like Daniel Debow (Rypple and Workbrain) and Jim Balsillie (BlackBerry) and others are investors and advisers to the new generation of tech companies in Canada.

And Canada’s tech ecosystems have gotten strong enough to encourage Canadians working abroad to come back and reinvigorate it, Armitage says.

“I think that’s come from the fact that many of leaders in that tech field themselves had mentors and supporters, and they’re just paying it forward now,” he says.

Canada has just about everything in place to create great tech companies, but challenges remain to scale more of them up into international powerhouses according to Teja and Armitage. “Taking this to the next level where we turn these small enterprises into medium and large size enterprises, we haven’t got that blueprint correct yet,” Armitage says.

Funding for tech still has a long way to go, but start-ups that have solid ideas and market traction have a better chance than ever of getting funding.

Given how far Canadian tech has come, Teja and others are optimistic.

“We’re at the beginning of a big wave,” says Teja.