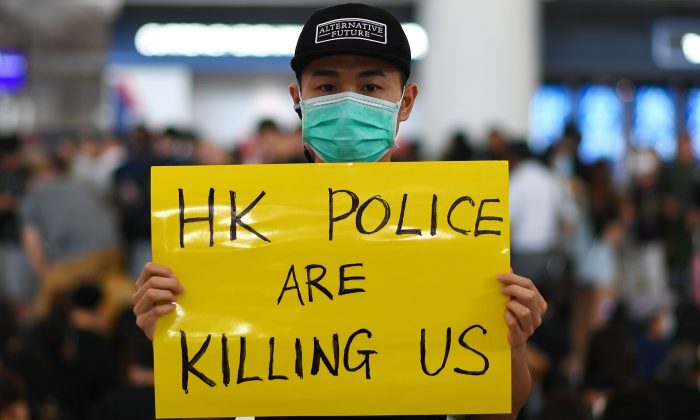 Since the Hong Kong pro-democracy protests began, the number of suicide cases reported in the city has soared. The total number has exceeded 100, according to a database compiled by Hongkongers based on local media reports of suicide deaths since early June. In addition, many of the victims are young protesters, and the circumstances of their deaths are suspicious.

Another Hong Kong resident was said to have committed suicide in the past week.

On Oct. 10 at around 6 p.m., a man fell from a high-rise building in Hong Kong’s Sha Tin area. As he was falling, one of his feet detached from his body. When the ambulance arrived, medical staff confirmed that he had already died.

The police later announced that the man, surnamed Lin, 31, did not leave a suicide note. The police also said his medical history shows he had suffered from mood disorders, which might provide an explanation for his motive to commit suicide.

However, netizens have raised five alarming points based on photos taken on site.

First, there were no obvious blood stains on the ground.

Second, a lot of bleeding would be expected if his foot broke off from his leg during the fall, but there was no blood flowing from the man’s body.

Third, his body was stiff, and based on the movements of his hands and arms during the fall, netizens suspected that his arms were bound or handcuffed when he was still alive.

Fourth, the man hit the ground head first, but there was no brain matter oozing from his head.

Fifth, there was already purple postmortem discoloration on the back of his body, and his corpse had turned partly pale and partly purple-blue, a sign that the man had been dead for at least a couple of days before the alleged suicide.

According to various media reports, since the protests began in June, the number of reported suicide cases have soared. In the two months following June 12, the number of suicide cases reported was about 10 people in every ten-day period. Then, from Aug. 21 to Aug. 31, the number suddenly rose to 18. And in the following ten days, the number jumped to 49. So far, the total number has exceeded 100, and many of the victims were young protesters, according to various media reports. Needless to say, this is extremely abnormal.

First of all, having more than 100 suicide cases in just a few months is unprecedented in Hong Kong’s history. These so-called suicide cases were either through jumping off high-rise buildings or by drowning. A fireboat operator wrote on a social media post that he had worked on fireboats for more than a decade, and the number of corpses he recovered in the past several months is as high as the total number from the past ten years.

In addition, there are many questionable details in these suicide cases as reported by various media outlets. For example, several victims who fell from tall buildings did not bleed but displayed past injuries on their corpses. One victim who had supposedly “drowned” was found with his hands bound together. Another victim whose body was found floating in the bay across Tsuen Wan had his mouth covered with tape, and it appeared that he did not die from drowning as his body was not bloated. In another horrific case, a naked woman fell from a tall building and it seemed her body had already been severed at the waist.

Many believe that these people were murdered before they were thrown into a river or thrown off a building. Most notably, the number of unusual suicide cases increased drastically after police raided the Prince Edward station on Aug. 31.

Riot police stormed MTR trains at Prince Edward station and made many arrests that night. Witnesses say the police assaulted passengers indiscriminately, chasing and beating them with batons on the platform and using pepper spray inside train carriages. Several people were hit on the head and bled heavily.

Many protesters were reported missing after the incident. Ms. Leung, the director of Kwun Tong community, shared on social media that an employee working at a mortuary service revealed that police caused at least six deaths at the train station. The mortuary company handled these six corpses, and the employees found that they had all died from broken necks. Apparently, the police had forcibly twisted their necks 90 degrees from behind to cause the deaths.

In other words, it is widely believed that among the more than 100 suicide cases, only a few individuals actually committed suicide, whereas the majority were murders disguised as suicides.

As the world expressed outrage at the increasing use of police violence against the Hong Kong student protesters, The AI Organization provided some valuable information to help explain the suspicious suicides in an article titled “Artificial Intelligence with Facial Recognition Hunts Hong Kong Youth for Capture, Rape & So-called Suicide.”

The authors of the article learned from intelligence agencies that the mainland Chinese regime has implanted their paramilitary forces within Hong Kong police departments.

It further points out that of the recent death cases declared as suicides, “some of the females are simply victims of rape in order to scare the masses of students.” Those victims who supposedly jumped off buildings were “coerced or thrown off.”

The article also elucidates that these tactics are widely used in China when the regime aims at tracking and persecuting democracy activists, Falun Dafa adherents, house Christians, Tibetans, Uyghurs, and others.

“The captured are sent to police stations, detention centers, reeducation labor camps, and concentration camps. Suicides are almost always the declaration of the Chinese Socialist Regime. They are subject to torture, rape, and organ trafficking which leads to their murder,” the article said.

Thirty years ago, the world witnessed the brutality of the Chinese Communist Party when Chinese soldiers opened fire on pro-democracy student protesters at Tiananmen Square. In the ongoing pro-democracy protests in Hong Kong, the Chinese regime doesn’t dare to deploy its troops openly. However, it has ordered mainland armed police to hit hard at Hong Kong protesters and has committed insidious murders while calling them suicides.