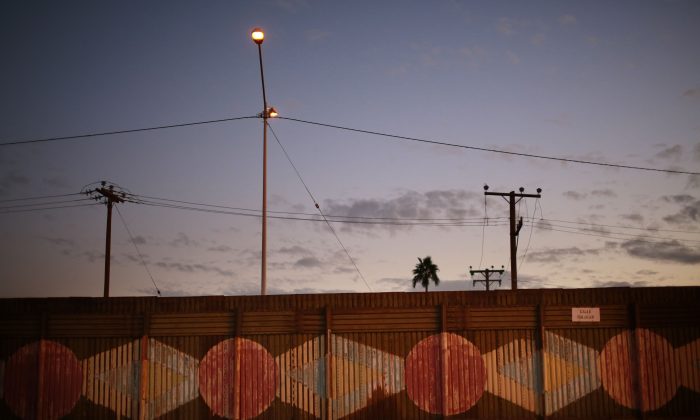 A high school student in Oregon has won a $25,000 settlement after suing administrators over a T-shirt he wore to school.

Administrators at Liberty High School told senior Addison Barnes, 18, that he had to cover up a shirt he was wearing that said “Donald J. Trump Border Wall Construction Co.” The shirt also featured a quote by President Donald Trump from 2016: “The wall just got 10 feet taller.”

Barnes refused to cover up the shirt, so administrators suspended him.

Following the suspension, the senior sued the school, Principal Greg Timmons, and the Hillsboro School District, alleging that his First Amendment rights were violated.

Barnes’ lawyer announced on Tuesday that they reached a settlement with the district that awards Barnes $25,000.

The settlement also includes a letter of apology to Barnes written by Timmons. The settlement follows a May 29 ruling by the U.S. District Court for the District of Oregon that the student couldn’t be banned from wearing the shirt.

“I brought this case to stand up for myself and other students who might be afraid to express their right-of-center views,” Barnes said in a statement, reported the Washington Examiner. “Everyone knows that if a student wears an anti-Trump shirt to school, the teachers won’t think twice about it. But when I wore a pro-Trump shirt, I got suspended. That’s not right.”

“Addison Barnes should be commended for his courage. The message on his shirt wasn’t the point of this case. We brought the case to police the thought police. The First Amendment does not allow what is going on in too many schools today,” added Oregon House Minority Leader Mike McLane, one of Barnes lawyers.

The school district wouldn’t make the apology Timmons wrote public but told KUOW: “The brief letter apologizes for the initial suspension charged to Mr. Barnes for leaving campus and any upset that may have caused, and wishes him well in the future.”

The district, though, said it reached a settle primarily due to the cost and disruption of the litigation, not because Barnes was right, claiming the punishment might have been upheld in a higher court.

“Liberty High School administration could reasonably forecast that Mr. Barnes’ shirt might cause other students to feel unsafe and could potentially lead to walkouts, altercations or other disruptive actions,” the district said.

However, Barnes’ lawyers noted that the high school allowed teachers to post signs supporting so-called sanctuary policies and, by attempting to censor Barnes, they tried to stop one side of the immigration debate, reported the Oregonian.

“The T-shirt is core protected speech, and walking down the streets of Hillsboro, no state official—petty or grand—would be able to do much about that T-shirt legitimately under the Constitution,” U.S. District Judge Michael W. Mosman said in his decision, finding that the district could not justify its censorship.