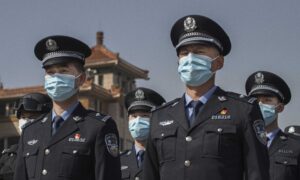 Xinhua’s so-called in-depth analysis of Xi’s speech stated, “Political corruption is the biggest form of corruption. Some corrupt elements have formed interest groups in an attempt to steal the power of the Party and the state, and engaged in organized crimes.”

This article claimed that some people are “trying to steal the power of the Party and the state.” This statement reveals the ongoing political infighting among high-level CCP officials.

The timing of the CCDI plenary meeting was carefully calculated—it took place just after the inauguration of U.S. President Joe Biden and before the “Two Sessions” (an annual key meeting among the top officials) is scheduled to take place on March 4 and 5 this year. As Xi said in a speech during a top-level meeting on Jan. 11, “Time and momentum are on our side. This is where we show our conviction and resilience, as well as our determination and confidence.” He also stated, “We must strengthen our survivability in all kinds of predictable and unforeseeable storms and threats.”

The internal challenges within the regime pose more of a threat than external factors. Xinhua stated, “Xi underscored the importance of improving political judgment, understanding, and execution in implementing full and strict governance over the Party.”

The first subheading of Xinhua’s article is titled, “The struggle that cannot and must not be lost.” This points to infighting within the CCP.

The second subheading is titled, “Behind the corruption problem, there are often political problems.” This is tantamount to acknowledging to the entire Party that the so-called anti-corruption campaign is not mainly targeting corrupt officials, but an internal political struggle. The CCDI has become a tool for addressing political infighting and targeting Xi’s political opponents. The article stated that “political and economic issues are intertwined and threaten the political security of the Party and the state. … Many corrupt elements are not only economically corrupt, but also politically transformed … seriously violating political discipline and political rules.”

The article also described, “Some corrupt elements hide deeply and are very good at disguising. … Some publicly say that we must resolutely implement the decisions and arrangements of the Party Central Committee, but they are secretly resisting them and doing the opposite.”

“Since this year, the Central Commission for Discipline Inspection has issued a notice of punishment for 7 central management cadres within 11 days. … Of these 7 people, 6 have been accused of violating the Party’s political discipline,” the article stated. This shows that there are quite a few people working against Xi and their punishments serve as a warning to Xi’s opponents.

The article gave a few examples of low-level officials who were recently taken down from their posts and expelled from the CCP. “Deng Huilin … participated in the formation of gangs in the Party … passionate about political speculation … ignoring the Party Central Committee. … Wen Guodong took a perfunctory attitude to the major decisions and arrangements of the Party Central Committee and did things his own way.” Deng Huilin was the former deputy mayor of Chongqing city. Wen Guodong was former vice governor of northwest China’s Qinghai Province. The article stated, “it is necessary to focus on investigating and punishing corruption cases where political and economic issues are intertwined, and promptly distinguish between these ‘double dealers’ … get rid of them and eliminate major political hidden dangers.”

The CCP’s internal fighting has already been made public before the Chinese New Year. Amid the recent surge in COVID-19 infections, Chinese officials seem to be paying more attention to maintaining their power rather than the plight of their people. In 2021, political infighting will intensify and undermine the very existence of the CCP.