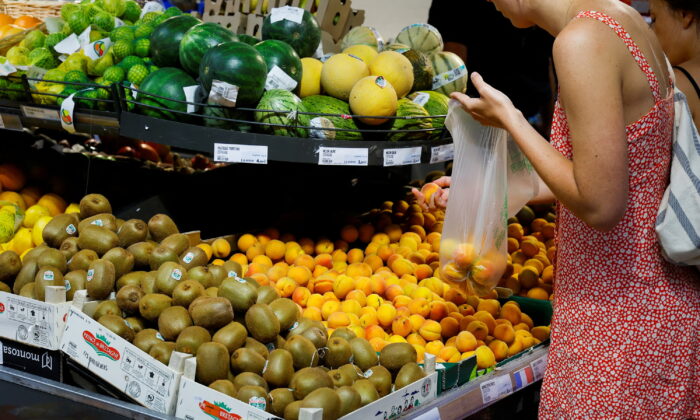 A customer shops in a supermarket in Nice, France, on Aug. 18, 2022. (Eric Gaillard/Reuters)
Economy

FRANKFURT—Eurozone inflation jumped to another record high and will soon hit double-digit territory, heralding a string of big interest rate hikes even as a painful recession appears increasingly certain.

Driven by expensive gas and a devastating drought, consumer prices jumped more than expected in August and further rises are already in the pipeline, suggesting more pain for households and businesses as they burn through their cash reserves.

This coincidence of high prices and low growth, often referred to as stagflation, leaves the European Central Bank with only painful choices that will increase the pain for the eurozone’s 340 million people.

Stimulus for the bloc will only fuel more inflation and ultimately damage the bank’s credibility, threatening the very foundations of its inflation-fighting mandate.

But policy tightening will slow growth even further, exacerbating a downturn now all but certain from the start of the heating season.

Ultimately policymakers will choose the fight against inflation and rates are likely to rise at every remaining meeting this year, pushing up borrowing costs for governments, firms and households, even as finances are already becoming tighter.

Wednesday’s inflation figures will even strengthen the case for an exceptionally large, 75-basis-point ECB rate hike next week and policy doves will have to fight an uphill battle to downgrade the move to a still large 50 bps.

Inflation in the 19 countries sharing the euro currency accelerated to 9.1 percent in August from 8.9 percent a month earlier and again beat expectations as price pressures broadened.

“The inflation rate is likely to leap upward in September,” Commerzbank economist Christoph Weil said. “Consequently, the pressure on the ECB to continue raising interest rates significantly is likely to remain high.”

While the rise in food and energy prices was unsurprising, the jump in services costs and the 5 percent inflation for non-energy industrial goods will clearly worry ECB policymakers.

They will also worry about the persistent rise in underlying prices, which indicates that high costs are now filtering through to the entire economy, through so-called second round effects.

Indeed, excluding food and fuel, inflation accelerated to 5.5 percent from 5.1 percent while an even narrower measure, which also excludes alcohol and tobacco, rose to 4.3 percent from 4.0 percent.

“We now expect the ECB to hike by 75 basis points next week even if new staff projections for growth are approaching the downside scenario,” Nordea said in a note.

High energy costs will force households to channel their spending towards their heating bill, leaving less for other items, particularly services.

Industry is also going to be hit hard, with energy-intensive sectors likely curtailing production. That will then create supply bottlenecks, adding to inflation.

“Higher inflation will further weigh on demand, dragging down growth and pushing the euro zone into recession this winter,” Riccardo Marcelli Fabiani at Oxford Economics said.

An energy price cap, contemplated by the EU, could help the ECB’s job, but inflation is already painfully high and has been for some time, so policymakers will not have the luxury of riding out the storm.

The labour market is another concern, adding to the case of rate hikes and letting a recession take hold.

With employment already at a record high, labour scarcity is increasingly painful and it is only a matter of time before wages start surging, setting off a hard-to-break wage-price spiral.

The ECB is keen to stop this even before it takes hold and some relief in an increasingly hot labour market even appears welcome.