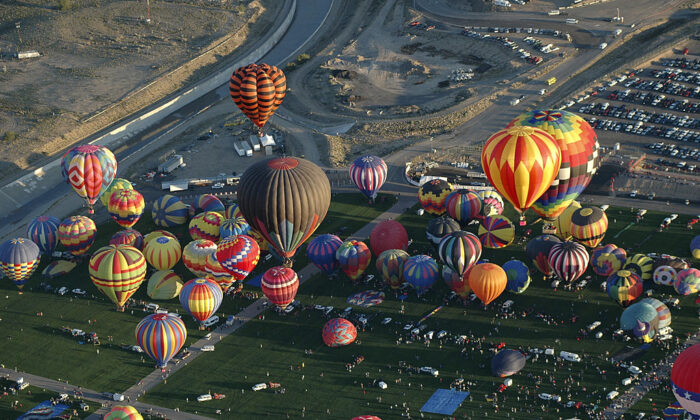 An aerial view of the first wave of the balloons that were launched at the Albuquerque International Balloon Fiesta. (John Bashian/Getty Images)
Destinations

Choose your own adventure, from hot air ballooning to skiing to exploring Route 66
By Kevin Revolinski

I’m soaring over the treetops, and dogs are coming out on backyard patios to growl up at the fiery roar of a dragon passing overhead. In between blasts of flame, it’s eerily silent, other than those occasional barks. Drifting like a dandelion seed on the wind, we alight briefly on a sandbar in the middle of the Rio Grande before the balloon pilot takes to the wind once again over the rooftops of Albuquerque, New Mexico.

Ballooning is a popular pastime in Albuquerque, and every October, the city actually hosts the Albuquerque International Balloon Fiesta right next to its international balloon museum. I can see desert all the way out to the horizon. The Sandia Mountains lie to the east. To the west, three worn volcano cones break the horizon line. Everything in between is dry and dusty, except for the verdant stripe of the Rio Grande to which Albuquerque clings.

A bird’s eye view is one angle on this town—either from a balloon or from the 2.7-mile tramway to the top of the 10,378-foot Sandia Peak in the Cibola National Forest—but there are many other angles on Albuquerque.

Red or green? Know the answer to this question, because you’ll get asked at just about any eating establishment in the area. In New Mexico, it’s all about the chile (and yes, this is how it’s spelled here). You can expect to find both varieties of these delicious chile sauces—everyone has their own recipe—not just in any place serving New Mexican food, but also in a lot of other styles of eateries. Breakfast joints will ask your color before pouring it over breakfast burritos. If you can’t decide, just say “Christmas” and you’ll get both.

One of the most famous restaurants in New Mexico is El Pinto. They’ve served presidents and superstars, and the place fills up with locals and visitors alike. Their salsa is so good that they bottle it up on-site and ship it around the country. This is a tequila-rich environment: The bar’s vast assortment pairs nicely with the enchiladas and chile rellenos.

But there are many alternatives to the expected Southwestern and New Mexico eats, from diner fare on Route 66 to Native American meals at the Indian Pueblo Kitchen. And in recent years, food courts have become popular. Places such as Sawmill Market and 505 Central Food Hall offer variety without a group consensus. You can have your ramen or tacos, while your friend eats ceviche or Detroit-style pizza.

A paddle down this lazy stretch of the Rio Grande or a hike through the Bosque—the forest park that borders it—gives the illusion of being somewhere quite different from the desert surroundings. The city’s high altitude, already at 4,900 feet at the river level, means cooler nights, but also thinner air and stronger sun. Pack sunscreen, drink water, and give yourself a day to adjust to avoid a bit of altitude sickness.

North of the city, take a drive along the Jemez Mountain Trail, a National Scenic Byway that cuts through carved red rock and sandstone forcing you to pull over often for photo ops and hot springs. You can visit the volcanic Valles Caldera, a national preserve with a crater rim 11 miles across. Activities range from fly fishing to hiking or cross-country skiing in winter. You can see herds of elk, a rich variety of birdlife, and, if you’re lucky, big predators such as a black bear or even a mountain lion. To look out from up on a ridge over the grassy plain in the east end of the park is reminiscent of a safari, and the lower number of visitors means you feel like you’re the only one there.

Visit With the Locals

And I mean the original locals. New Mexico has 19 pueblos, communities of Native Americans, and visits there offer unique cultural experiences. The Sky City of Acoma to the west of Albuquerque is the oldest continuously inhabited city in North America. Perched on a 350-foot-high mesa, the adobe homes have some modern touches, such as paned windows and doors, but ladders still lead to second floors, there’s no electricity or plumbing, and the 17th-century church and cemetery still stand at the edge of town.

Don’t miss a stop at Petroglyph National Monument, where you can see thousands of mysterious figures carved into volcanic rock. It’s a story of geology as well as a glimpse of the people of the past.

Stargazers should visit the observatory at the University of New Mexico, which offers free admission on Friday nights. You can find plenty of dark skies within an hour’s drive of Albuquerque and occasional astronomer club events.

There is only one place where you can find Route 66 intersecting with … Route 66. In downtown Albuquerque is the site where a former governor once rerouted America’s most famous highway north to Santa Fe. If you want a nice overview of the Mother Road, your first stop in town should be the Albuquerque Trolley. Ride down the Central Avenue portion of Route 66 with the restored KiMo Theater, and see the neighborhoods and abandoned train station that consistently end up as Hollywood movie sets.