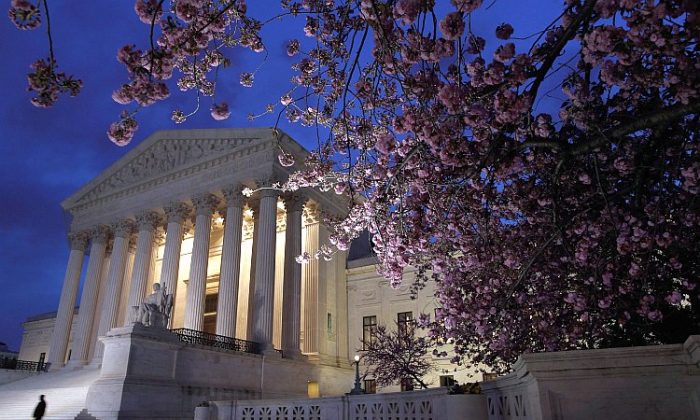 A security officer walks along the west front of the U.S. Supreme Court Building on March 28, after the court heard the fourth and final oral arguments of the Patient Protection and Affordable Care Act, dealing with Medicaid expansion. (Chip Somodevilla/Getty Images)
US

WASHINGTON—The Supreme Court held a fourth session March 28 on the Affordable Care Act (ACA), to hear oral arguments concerning the Medicaid expansion component of the health reform law. The debate was similar in spirit to the previous day’s hearing on the law’s individual health insurance mandate, when the Court appeared split down liberal-conservative lines.

The Wednesday afternoon Medicaid expansion provision hearing was a bit of a surprise, because no lower federal court had overturned it. Indeed, the Eleventh Circuit Court that previously struck down the individual mandate upheld Medicaid expansion.

The ACA will increase enrollment in state Medicaid programs by allowing in year 2014 all persons under the age of 65 with incomes up to 133 percent of the federal poverty level (FPL)-$14,856 for an individual and $30,656 for a family of four (based on the 2012 federal poverty level).

This provision will raise Medicaid numbers by an estimated 16 million, according to the Alliance for Health Reform. But in actuality, no one really knows how many new uninsured persons Medicaid will pick up.

But it was the administrative costs that concerned Florida, in the suit challenging ACA that was eventually joined by 12 other states. Florida Attorney General Bill McCollum said on the day President Barack Obama signed the law-March 23, 2010-that Florida would have “to spend billions of dollars without providing funds or resources to the state to help subsidize the cost of implementation of the law.”

However, the administrative costs were not the main reason petitioners challenged the constitutionality of this provision. Paul Clement, speaking on behalf of the petitioners, said the Medicaid expansion was unconstitutional because it was “coercive,” and thereby violated the tenth Amendment.

Clement did not make his case based on the eventual 10 percent state cost and indirect costs to administer the program. The authority of Congress to expand Medicaid derives from the Taxing and Spending Clause (Article 1, Section 8, Clause 1) of the U.S. Constitution, and it’s different from the other enumerated powers of Congress in that the spending must be voluntary. He said that the federal money in the ACA for Medicaid was not voluntary.

Justice Elena Kagan asked what if the states received a “boatload of federal money” to spend on their poor people’s health care. “It doesn’t sound coercive to me, I have to tell you,” she stated.

Clement explained the coercion factor. “Congress here made a distinct and conscious decision to tie the state’s willingness to accept these new funds, not just to the new funds but to their entire participation in the statute,” he argued.

“Isn’t that true of every Medicaid increase?” Justice Ruth Bader Ginsburg responded. “That each time … and every time, the condition is, if you want the Medicaid program, this is the program, take it or leave it.”

Later, Solicitor General Donald Verrilli, presenting the federal government’s side, made the case for the Medicaid program that the states opted in voluntarily, time after time.

In prior Medicaid expansions enrolling more eligible people, the state’s participation was voluntary, Clement said. But in the ACA, “Congress here made a distinct and conscious decision to tie the state’s willingness to accept these new funds, not just to the new funds but to their entire participation in the statute.”

In other words, from a practical standpoint a state has no choice but to expand its program or risk losing federal funding for the poor and disabled people it already cares for. The 26 states that are suing have no choice, said Clement, because they “can’t afford to have their entire participation in this 45-year-old program wiped out.”

Justice Ginsburg pointed out that other states are glad to take the money and don’t regard it as coercive. Some states had filed amicus briefs in support of the expansion arguing that it will help stabilize their programs, according to a Feb. 16 op-ed piece by Sallie Sanford, in the JURIST.

“What’s coercive is not the absolute guarantee that the secretary could cut off every penny, but the fact that she could,” said Clement, referring to Secretary of Health and Human Services (HHS) Kathleen Sibelius, who is the object of the 26 states’ suit.

Justice Stephen Breyer challenged this scenario. He said HHS could not capriciously deny funding to a state because government officials had to show reasonableness before they can act, based on the Administrative Procedure Act.

Clement made an effective counter by displaying a letter concerning Arizona, which was contemplating dropping its Children’s Health Insurance Program (CHIP), a small portion of their Medicaid program. The letter from the Secretary said Arizona risked losing its $7.8 billion Medicaid program.

Verrilli pointed out that there is discretion in the statute and not to assume it would be abused. He said the Secretary’s power has never used her authority to withholding funding and would never do it.

Kagan said Secretary Sibelius is “reluctant and loathed to take money away from poor people’s health care. And that that’s why these things are always worked out.”

Chief Justice Roberts said he wasn’t saying it would happen, but “it’s a significant authority that we are giving the Federal Government to say you can take away everything if the States don’t buy into the next program.”

Verrilli and Justice Sonia Sotomayor pointed out the political realities would act as restraint on all parties, to be accountable. “It’s coercive if no one could be held politically accountable,” Sotomayor said.

Verrilli argued that sixty percent of the funding of Medicaid was “optional,” and it was a choice the states made to stay in the program. “I agree that it would be a difficult choice in some circumstances. But that is not to say it’s coercion as a legal matter or even as a practical matter,” he said.