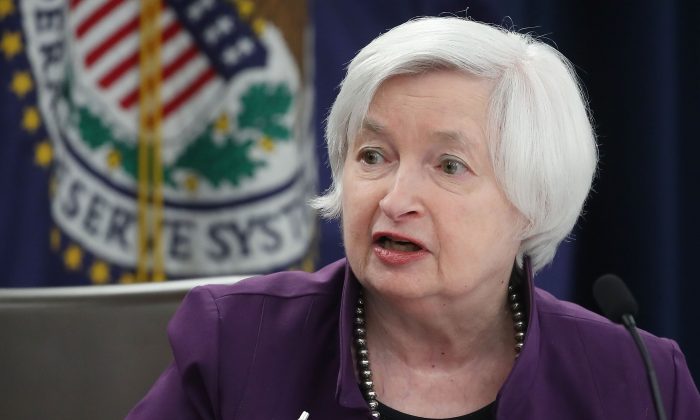 WASHINGTON—Highly indebted firms are vulnerable to economic fallout from coronavirus and pose a big risk to the U.S. economy, according to Janet Yellen, former Federal Reserve chairwoman.

Before the COVID-19 pandemic, the economy was “generally in good shape” and the banking system had ample liquidity, Yellen said in a video conference hosted by the Brookings Institution on March 30.

“But non-financial corporations entered this crisis with enormous debt loads, and that is a vulnerability. They had borrowed excessively in my view through issuing corporate bonds and leveraged loans,” she said.

Thanks to historically low-interest rates, corporate debt has been growing at a rapid pace since the recovery from the financial recession of 2008. Pension funds, insurance companies, and investors looking for higher yield opportunities also contributed to this borrowing spree and encouraged corporate debt to swell, Yellen said.

“The problem is that it creates a risk to the economy, and I’m afraid we’ll see that in spades in the coming months, because it may trigger a wave of corporate defaults,” she added.

Nonfinancial corporate debt increased by 78 percent in the past decade, reaching $6.6 trillion, according to CNBC.

Moody’s Investors Service recently cut its outlook on U.S. corporate debt to negative from stable, stating that the pandemic would result in rising default rates.

The ratings company warned that sectors “most sensitive to consumer demand and sentiment” such as global passenger airlines, the lodging and cruise industries, and autos are the most vulnerable.

Energy companies are also at high risk due to a plunge in oil prices while banks are facing challenges in this low-interest-rate environment, according to Moody’s.

The downgrade came despite the Fed’s commitment to buy corporate debt in an effort to boost liquidity.

The Department of the Treasury will provide $450 billion to the Fed to purchase loans and investments, as part of the recent coronavirus stimulus package. This creates roughly $4.5 trillion of lending capacity, according to economists, as the central bank could provide $10 in loans for every $1 it receives from the Treasury.

According to Moody’s, the central bank’s intervention is helpful, but some of the heavily indebted sectors will continue to face challenges.

“Government support will cushion the blow for some companies, but it is unlikely to prevent distress at businesses with less certain long-term viability,” Edmond DeForest, senior credit officer at Moody’s, wrote in a report.

V-Shaped Recession or Not?

According to Yellen, highly indebted firms, even when they avoid default, usually slash investment and hiring, and that will make the economic recovery more difficult.

“If lockdown ends reasonably soon and the monetary and fiscal supports that are now in place enable households and businesses to resume activity when the confinement ends, we’ll likely see a V with positive growth by the fourth quarter of the year, but that’s a best-case scenario,” she added.

However, Yellen is worried that a fast V-shaped recovery may fail to materialize if firms start to sever their relations with employees and scale back investment and hiring to deal with high debt burdens.

“That will make it harder for workers to get new jobs and for businesses to start up again smoothly,” she said.

Most analysts now expect the U.S. economy to contract sharply in the first two quarters this year due to the worsening pandemic and the measures taken by the government to fight it.

The Goldman economists now predict the GDP to contract by 9 percent in the first quarter and 34 percent in the second. And the unemployment rate is expected to rise to 15 percent by mid-year.

But this “deeper trough” will be followed by a “bigger rebound” in the second half of the year, according to the Goldman Sachs report. And there will be further strong gains in 2021.

“While the uncertainty is substantial, we expect the lockdowns and social distancing to result in sharply lower new infections over the next month, and our baseline is that slower virus spread and adaptation by businesses and individuals should set the stage for a gradual recovery in output starting in May, June,” the report states.