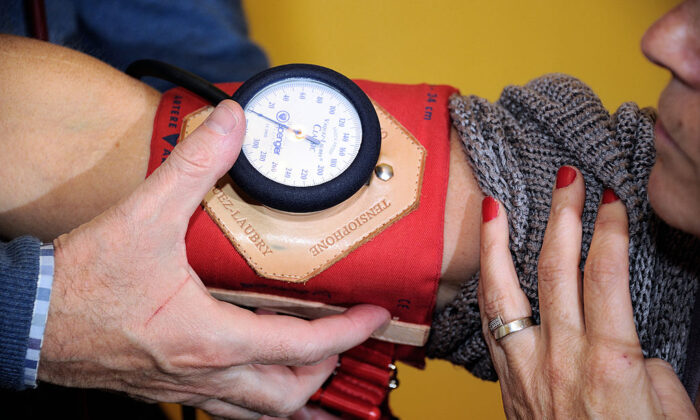 A doctor (R) examines a patient on September 25, 2012 in Godewaersvelde, northern France, during a medical check-up. (Philippe Huguen/AFP/GettyImages)
Australia

High Blood Pressure Is a Silent Killer, but Experts Say Australia Is Not Doing Enough

Australia should not discount the danger of high blood pressure, which is the main culprit behind most death and disease in the country, a group of Australia’s leading experts has warned.

While just over one in five adults–more than four million Australians–have high blood pressure, also known as hypertension, researchers found that many of them are not receiving proper treatment, and 50 percent of them are not aware of it.

“Blood pressure is the leading cause of death. Lots of people are not aware of that,” said lead author Alta Schutte, Professorial Fellow at The George Institute for Global Health and Professor of Cardiovascular Medicine at UNSW Sydney.

“If you’re not aware of it, then you can’t do anything about it, so awareness is the first step.”

“Once that is covered, then you can start treating it. […] When you treat people, and their blood pressure is not reduced sufficiently, then the treatment needs to be improved. And there are different ways of doing that. That’s where there’s a gap in Australia.”

Experts estimated that if all Australians living with high blood pressure received proper treatment, as many as 83,000 lives could be saved, which would result in a $91.6 billion return. Even reducing rates of high blood pressure by just a quarter could save 37,000 lives and return $34.3 billion to the economy.

But although raised blood pressure is the leading risk factor for major adverse outcomes such as coronary heart disease, stroke and dementia, the “top three killers” of Australians, Schutte said there did not seem to be any urgency to address it in the country.

“Raised blood pressure should be front and centre of the national health agenda, but instead, attention is currently focused on better managing the diseases it leads to.”

“In the United States last year, […] the Surgeon General released a national call to action to improve blood pressure control rates, and here it’s much worse, and nobody’s doing anything.”

In Australia, it is estimated that raised blood pressure is the ticking bomb behind 43 percent of coronary heart disease, 41 percent of stroke, around a third of chronic kidney disease and atrial fibrillation and just under four percent of dementia cases.

“While managing these conditions is undoubtedly important, major public health impact is more likely to be achieved by improving awareness of and screening for high blood pressure and improving blood pressure control,” Schutte added.

A report Australian Institute of Health and Welfare showed only a third of high blood pressure cases are under control, implying over two-thirds of Australians with raised blood pressure were not properly managed. This situation has not improved for the past 10 years.

“While the government’s recent announcement of $40.5 million for a new Medicare Benefits Schedule item for 24-hour ambulatory blood pressure measurement to improve the diagnosis of hypertension is a good start, we believe there’s much more that could be done to address this pressing health issue,” Schlaich said.

High blood pressure is often dubbed “a silent killer” because most people who have it do not show any symptoms, said Professor Garry Jennings, Chief Medical Advisor and interim CEO of the Heart Foundation.

“The good news is high blood pressure can be controlled, but our data shows that 15 per cent of Australians aged 45-74 missed having their blood pressure checked in the last two years,” he noted.