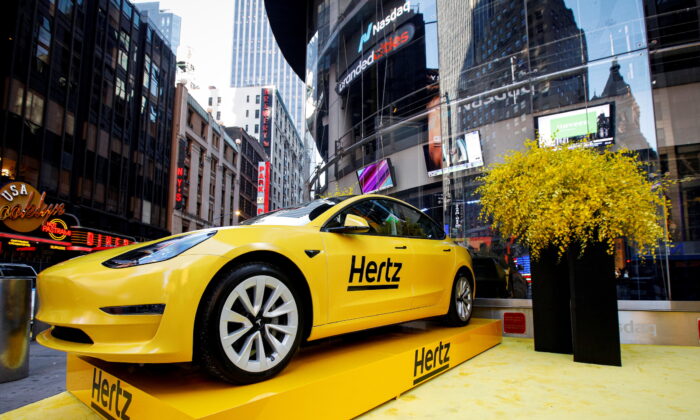 A Hertz Tesla electric vehicle is displayed during the Hertz Corporation IPO at the Nasdaq Market site in Times Square in New York, on Nov. 9, 2021. (Brendan McDermid/Reuters)
Companies

Scherr will assume his new role as CEO and a board member on Feb. 28, Hertz said in a statement, adding that Fields would remain as a director.

The leadership change comes at a time when rental car companies are dealing with a pandemic-driven surge in demand but are also grappling to secure vehicles due to global chip shortages and supply chain snarls.

Hertz is also in the process of raising debt to refinance expensive preferred stock issued as part of the company’s exit from bankruptcy.

The Florida-based company, which made a stock market return last year, was in the news in November after it placed an order for 100,000 electric rental cars from Tesla Inc.

Scherr, who resigned from Goldman in September after a near three-decade stint, played a key role in revamping Goldman’s image from a Wall Street firm to a traditional bank.

He will receive a base salary of $1.5 million and will have a performance-based annual bonus target of 160 percent of his salary, Hertz said separately in a securities filing.