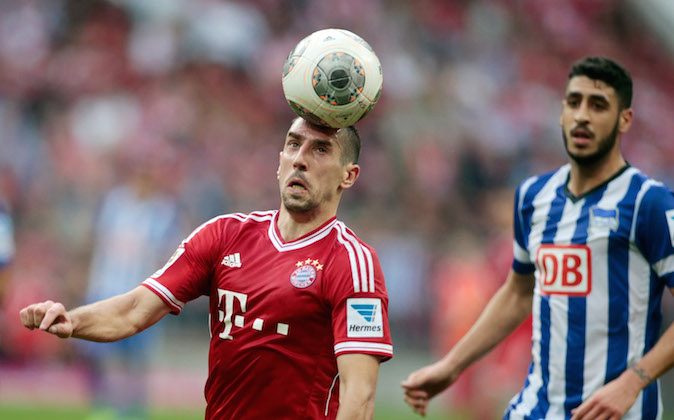 Franck Ribery (L) of Muenchen battles for the ball with Tolga Cigeri of Berlin during the Bundesliga match between FC Bayern Muenchen and Hertha BSC Berlin at Allianz Arena at Allianz Arena on October 26, 2013 in Munich, Germany. (Photo by Johannes Simon/Bongarts/Getty Images)
Soccer

The game will be broadcast on GOLTV USA in the United States.

FRANKFURT, Germany— It wasn’t always so easy for Bayern Munich.

Bundesliga championships used to be decided on the last day of the season, or even in the last minute. In a famous episode in 2001, Schalke thought it had won its first title and its fans and players were already celebrating — too soon, it turned out.

Schalke had beaten Unterhaching 5-3, while Bayern Munich was losing 1-0 in Hamburg. Both teams were even on points but Schalke had a better goal difference.

The match in Hamburg went into injury time and Bayern scored to snatch the title with a draw.

Precise German timekeepers say Schalke had been “champion” for four minutes and 38 seconds before Bayern pulled off its stunning feat, leaving Schalke to be “the champion of the hearts” but with no silverware to show for it.

Bayern won last season’s championship with six games to spare and had 25 points more than Borussia Dortmund in the end.

This season, Bayern may top even that.

If it wins on Tuesday at Hertha Berlin, Bayern will have the title with seven games to spare, the earliest champion in the Bundesliga’s 51-year history. Bayern is 23 points ahead of Dortmund.

By winning 2-0 in Mainz on Saturday, Bayern notched its league-record 18th consecutive win and stretched its unbeaten run to 51 games — also a record.

While Bayern can be entertaining to watch, its dominance is such that the title race in the Bundesliga has become a huge bore.

It’s a close battle for second and an interesting struggle to avoid relegation involving some big-name clubs such as Hamburg and Stuttgart, but the title has been practically decided by the 12th round, when Bayern took a four-point lead.

Bayern is unbeaten this season — and looks likely to go all the way without a loss — and has drawn only two matches, against Freiburg and Bayer Leverkusen. It won 3-0 at Dortmund and its victories include a 7-0 rout at Werder Bremen; 5-1 against Schalke; 6-1 in Wolfsburg. It has scored 76 goals, while second-best Dortmund has 17 fewer. Bayern has conceded only 12 goals, 17 fewer than Dortmund.

“It’s not easy for us to play outstanding games all the time with a 23-point lead,” Bayern coach Pep Guardiola said in Mainz, where Bayern came alive in the last 10 minutes to score twice.

Last season, Bayern accomplished an unprecedented club treble by sweeping the Champions League, the Bundesliga and the German Cup.

It could do the same this season, but Guardiola says the Bundesliga has the most weight for him.

“That’s where you have everything, games with wind, with rain, with a good pitch, with a bad pitch, injuries. That’s where the whole year counts,” he said.

The coaching transition between Jupp Heynckes and Guardiola has gone very smoothly.

Bayern’s possession-based game resembles Guardiola’s Barcelona, but Bayern shows more purpose in attack. Bayern spends most of a game in the opponent’s half, attacking early and strongly. Any loss of ball results in two or three players swarming the opponent to win it back quickly.

Guardiola switches systems and players at will, without harming his team’s game. He rotates players regularly, but Bayern scores and wins regardless who is on the field. He uses players in unusual positions. His authority is such that stars accept his decision without complaints, even when they are told to sit on the bench. His squad is unquestionably the best in the league and all the top players have long-term contracts.

“We never know who is going to play, we have a lot of options in our squad,” Germany midfielder Thomas Mueller said.

Guardiola announces his lineup shortly before departing for the stadiums.

Even top scorer Mario Mandzukic (17 goals) was left off the team altogether after underperforming in practice. It’s not unusual for Franck Ribery or Arjen Robben to sit out a game.

Bayern passes the ball on the average 719 times in a game, with an 88.8-percent accuracy. Both are top rates in the league.

The only blemish on what could be a perfect season is the tax evasion case of Uli Hoeness.

Hoeness resigned as club president following a conviction for tax evasion on a private Swiss bank account and will serve a 3½-year prison sentence that is expected to begin before the season is over.

Hoeness is credited with building up this dominant team.