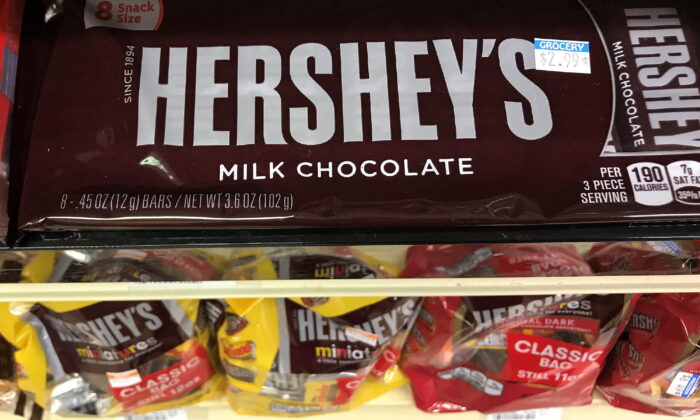 Hershey's chocolates for sale on a store shelf in the Manhattan borough of New York City on July 19, 2017. (Carlo Allegri/Reuters)
Companies

The Hershey plant, located at the foot of the Blue Ridge mountains in Stuarts Draft, Virginia, has around 1,400 employees and primarily makes products with peanuts, including Reese’s Peanut Butter Cups and other candy bars like Almond Joy.

Hershey in the lead up to the vote, whose counting and preliminary result were livestreamed by the National Labor Relations Board on Thursday, created a website to state it did not want a union at the 40-year-old plant.

The website highlighted Hershey’s perceived risks associated with unionization, including compromising its ability to recruit workers. It also pointed to the plants being open when a few rivals had furloughed employees during the pandemic.

Hershey, whose two out of seven U.S. plants are unionized, also said most people who left the plant said they did so due to a lack of time-off rather than pay. It added its attendance policy “needed some work” and a team was looking at simplifying rules related to time-off and absences.

Hershey and the Bakery, Confectionery, Tobacco Workers, and Grain Millers’ International Union did not immediately respond to requests for comment on the result.

A few Starbucks coffee shops, however, have unionized in the past few weeks, while workers at King Soopers and Kellogg’s cereal plant have gone on strikes in recent months to secure better contracts.