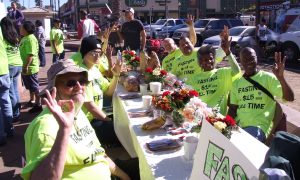 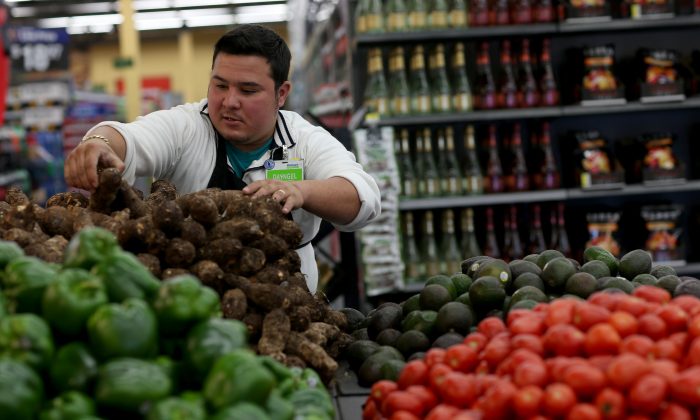 A Wal-mart employee stocks produce at a store in Miami, Fla., on on Feb. 19, 2015. (Joe Raedle/Getty Images)
Business

Walmart CEO Doug McMillon announced Feb. 19 that the company will raise its entry wage “to at least $9 an hour in April, and, by February of next year, all current associates will earn at least $10 an hour.” Federal minimum wage is $7.25 an hour. In a video to employees, he said, “We’re always trying to do the right thing and build a stronger business. We frequently get it right but sometimes we don’t.”

Workers have sued Walmart and certain Walmart affiliates for paying less than minimum wage, wage theft, forced overtime, gender discrimination, abusive scheduling practices, and retaliation against workers who tried to join unions. In an announcement of 4th quarter earnings, the company noted that a “Wage and Hour Litigation Matter” had reduced its earnings per share by .05 percent, both for the quarter and for all of 2014. That was a greater percentage than the cost of closing underperforming stores in Japan, .03 percent.

“When we take a step back, it’s clear to me that one of our highest priorities must be to invest more in our people this year,” said McMillon. He said he also wants to create greater opportunities for workers, via better training and career ladders. Managers will offer more consistent schedules and better notice of schedules.

When we take a step back, it’s clear to me that one of our highest priorities must be to invest more in our people this year.
— Doug McMillon, Walmart CEO

The raises will go to 500,000 people and will cost $1 billion, according to the announcement.

Amid a national discussion about the growing wealth gap between the richest people and everyone else, Walmart has been a scapegoat, symbolic of corporations that pay workers the lowest wages the market will bear. Tales of Walmart workers poor enough to qualify for food stamps or Medicaid hurt its reputation.

Aetna’s C.E.O., Mark Bertolini, announced in January that Aetna’s lowest-paid workers will get big raises. Some will go from $12 to $16 an hour. “Companies are not just money-making machines,” he told the New Yorker. “For the good of the social order, these are the kinds of investments we should be willing to make.”

Walmart’s MacMillon sounded as if he was thinking the same way. Walmart is the biggest employer in the United States, with 1.3 million employees. If it chooses to share more of the wealth it generates with its non-executive workers, it might be the beginning of a big change in America’s economic landscape.

The labor market is changing. “The number of state and city minimum wage increases across the country, and now this move from Walmart, is important,” according to Alexander Colvin, professor of labor relations and conflict resolution at Cornell University.

“Walmart is a bellwether. A lot of people are looking at it. Thirty or 40 years ago they would have been looking at General Motors ,” said Colvin. It’s a high-profile company and a famously cost-focused employer, he said.

Why Walmart Workers and Supporters Held Protests on Black Friday

Walmart noted that the raises reduce its 2015 profits. But the discontent and turnover that go with being underpaid are costly for companies too.

Bertolina told the New Yorker: “It’s hard for people to be fully engaged with customers when they’re worrying about how to put food on the table. So I don’t buy the idea that paying people well means sacrificing short-term earnings.”

Michael Saltsman, research director at the Employment Policies Institute, was glad it happened with no government intervention. “Walmart’s decision to increase its store minimum wage to $10 an hour exemplifies how wages rise in a free economy: by choice, not by government mandate. Just because a $10 minimum wage is the right choice for Walmart, however, does not mean it should be mandated for all other businesses, regardless of industry or size,” he said in a statement.

But Colvin thinks discussing wages in terms of free markets or government intervention oversimplifies the issue.  “People have long term relationships with employers,” he said.  “It’s not like deciding whether to buy a gallon of milk at Target or Walmart.”  And companies know that the loyalty and commitment of workers is valuable. People are not commodities to be bought at the best price.

If the federal minimum wage was indexed to inflation, it would be over $10.00 an hour, according to the Congressional Research Service. “The real value (purchasing power) of the minimum wage has decreased substantially over time,” according to Craig K. Elwell, CRS Specialist in Macroeconomic Policy.