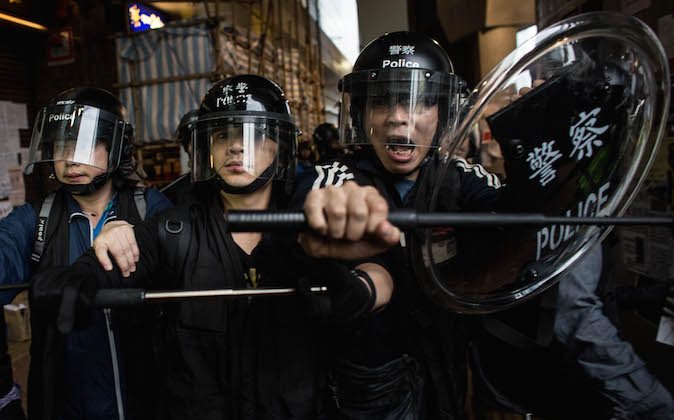 Fear. That’s the explanation the son of a police officer arrived at to answer the question of why police acted aggressively towards protesters during the Hong Kong protests.

Chiang Kang, a writer for Hong Kong news website inmediahk.com, recently asked his father, who’s a Hong Kong cop, why the force is so jumpy about protesters.

“What if you burn the car? What if you occupy the airport and shut down Hong Kong?” Chiang Kang’s father said.

The police “refuse to believe that ‘peaceful protesters’ really exist in this world,” Chiang Kang added.

Chiang Kang father’s perspective on protesters is perhaps representative of people his age.

In a blog post, Chinese University of Hong Kong journalism lecturer Chan Yuen discusses a generational divide that is preventing today’s Hong Kong youths from communicating their views on politics and society with previous generations.

The parents of the Umbrella Movement protesters, who endured tough times during the British colonial rule, have memories of violent protests in 1967 that was instigated by leftist groups inspired by the Cultural Revolution in China. The leftist riots saw 51 people killed by the year’s end.

Leftists protesters also caused a bomb crisis, planting countless homemade bombs (some turned out to be fake or duds) around the city in a bid to sabotage British colonial rule.

This particularly bloody snippet of history tainted what protests mean for older folk, resulting in the knee-jerk reaction by the police today, Chiang feels.

But the fear of “what will protesters do next?” is only one reason why police used violence to drive off protesters during the occupation phase.

Chiang Kang says that police truly believe that they are standing on the side of justice and doing things for “the greater good.” And to be responsible for the “stability” of Hong Kong society and uphold their reputation as guardians of the law, police willingly beat and arrest “unlawful” protesters to prevent Hong Kong from descending into “chaos,” Chiang argues.

It too doesn’t help that protesters have been reacting to police violence by calling them “black police” (a term which suggests that police are linked with triads), insulting them and their families, and occasionally flipping the bird.

Such actions enrage the cops, causing them to be more aggressive, and at least in one case, show back the bird.

And things may be worse after the end of the street occupations.

Protesters have started a “Shopping Revolution,” where they use flash mob tactics to maintain a substantial presence in the commercial district of Mong Kok.

Because of this, police have become even more nervous and paranoid as they sought to regain control and order in the area the only way they know how. Multiple reports have surfaced on social media about how police force passers-by to show their identifications, lash out at crowds willy-nilly, and make seemingly haphazard arrests.

The only way to resolve the circle of hatred and mistrust? Protesters should talk to the police more, Chiang Kang suggests.

“If we don’t reach out and communicate to the police, or cease trying to let them see where we’re coming from, the police will forever be against us,” Chiang Kang says.

“If this keeps up, things are bound to explode one day.”