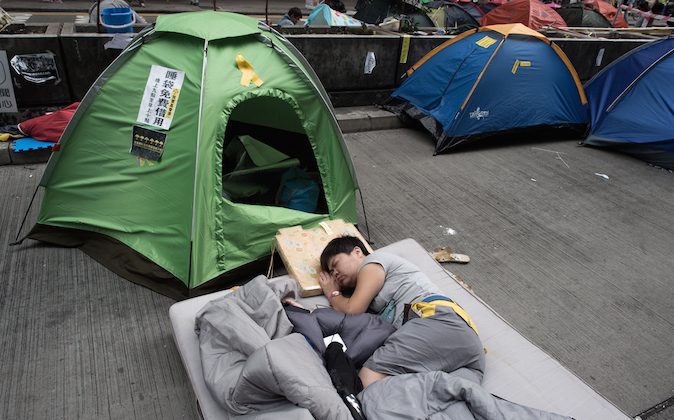 A pro-democracy protester sleeps on a street in the Mongkok district of Hong Kong on October 28, 2014. A month into the mass pro-democracy protests gripping Hong Kong, the movement is under pressure to keep up momentum -- but those on the streets say their vigil has already changed the city for good. (Nicolas Asfouri/AFP/Getty Images)
China

Because the kids are here to stay in Hong Kong, they’re not in a hurry to pack up their tents.

Reuters recently conducted an informal survey of the Occupy Central protesters on the one-month mark of the demonstrations, and found that about nine out of ten of the mainly student protesters are prepared to camp out in the streets for more than a year.

The student and citizen protesters are demanding that Hong Kong’s Chief Executive be selected by universal suffrage during the next elections in 2017, and are also calling for Leung Chun-ying, the hugely unpopular current Chief Executive, to resign.

To see their demands met, 87 percent of the students polled said that they are willing to hold out at the protest sites in Admiralty and Mong Kok for more than a year, while 93 percent of them said that they would simply pack up and move to a new location if Hong Kong police do unceremoniously thump them out.

Indeed, with an unusual display of brutality, Hong Kong police battered and bloodied unarmed protesters with their batons and riot gear, and very nearly succeeded in clearly the protesters from Causeway Bay and Mong Kok in the third week of the demonstrations.

The protesters eventually rallied, and managed to reclaim the protest site in Mong Kok on Oct. 17.

To a casual observer, the students resilience in the face of police violence and government apathy looks almost foolhardy, especially when considering their seemingly idealistic demands.

After all, the Hong Kong government is on Beijing’s side and totally unsympathetic to the students’ demands, and the Chinese communist regime is dead set on not fulfilling its promise to introduce democratic reform to the former British colony.

But for the youths of Hong Kong, getting their democratic rights now is a very real, pragmatic step towards securing their future.

The rising prices and growing income inequality in Hong Kong doesn’t affect the ever-increasing number of tycoons, but is already causing problems for the young people who are just starting out in their careers.

“The city’s wealth gap is cavernous.

“My generation could be the first in Hong Kong to be worse off than our parents,” adds the 18-year-old, who is arguably the most famous face in the Umbrella Movement.

Hong Kong’s income inequality will only exacerbate in the future, and will be made worse Hong Kong’s serious fertility problem.

According to the Hong Kong government’s estimates, “elderly dependents” (those ages 65 and above) will make up almost half of Hong Kong’s seven million population, and this will place a heavy burden on this batch of protesting students to care for them both physically and financially.

With such a “bleak economic situation” to look forward to, no wonder the youths of Hong Kong are refusing to leave the streets until their cries are heard and acted upon before its too late.

Perhaps Wong best sums up the hopes of Hong Kong’s students: “In a world where ideas and ideals flow freely, we want what everybody else in an advanced society seems to have: a say in our future.”