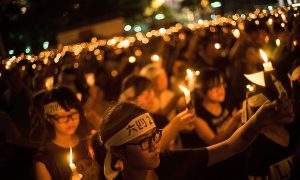 Pick out the most damning cases of human rights abuse in the United States as reported in American media, government documents, and academic articles. Add a few other issues that are not quite human rights problems, stitch them together under broad subsections, then write an introduction littered with critical adjectives. That sums up this year’s edition of China’s customary, retaliatory response to the U.S. State Department’s annual human rights report.

The U.S., notes China’s seven-page report, is “haunted” by “spreading guns,” uses “cruel tortures indiscriminately,” has low voter count during elections and a political system manipulated by “money and capital,” and has “grim problems” of racial and institutional discrimination. The prevalence of mental illnesses is even held against the United States.

The report is titled: “Human Rights Record of the United States in 2014.” It is the only such report produced by China each year.

As in previous years, it was released a day after the publication of the U.S. State Department’s reports on human rights conditions around the world—covering 195 countries, including China.

But there are major differences between the two products.

Here is a list of what is badly wrong with China’s attempt to evaluate human rights issues in the United States:

Its Purpose Is Not Actually to Promote Human Rights

Since 1997, China only publishes the one annual report on another country’s human rights, and that country is perennially the United States.

It is even difficult to call what China does a “report”—the document, which is written in a heavily critical tone, inevitably highlights the most negative news or problems in America instead of offering a dispassionate assessment and critique on America’s human rights situation.

In a television segment on the New York-based New Tang Dynasty Television, political commentator Chen Pokong likened the yearly China report to a school bully, or petty criminal, lashing out after being caught.

Incidentally, it is easy to find negative reports about life in the United States because of its free press. Journalists are allowed to pursue whatever story they so desire, and instances of rights abuse or criminal violence make for interesting reading or increased television viewership.

Finding evidence of rights abuse in China takes some investigative work and fact checking because the Chinese Communist regime is only keen on promoting positive stories and censoring negative reports in mainland Chinese media, which is state-controlled.

Some of the Arguments Don’t Actually Make Sense

The mental health of Americans, or whether 3-year-olds in the United States are enrolled in educational programs, don’t exactly qualify as human rights abuses. Nor would a U.S. political system that has supposedly “decayed over time.” Yet these are given as examples of America’s human rights violations in the 2014 China report.

In contrast, the State Department reports point out legal or political loopholes that lead to actual abuse and torture of political dissidents or prisoners of conscience, the denial of basic human freedoms, and the institutionalized discrimination of minority groups in China.

Take education for example. A law in China mandates nine years of compulsory education for children, but the State Department found that many children in rural areas don’t complete their required education, if they even have access to education at all. Meanwhile, there is no law in the United States that requires 3-year-olds to sign up for classes.

The Chinese Communist Party no longer denies that human rights abuses take place in China—with the proliferation of social media and general social awareness of abuses, that strategy became no longer tenable.

Instead, the propaganda line has switched to what in Chinese is called ‘bilan’ (比爛): “comparing badnesses.” The idea is to say: “We’re not perfect, but neither is the United States. Now look how bad they are.” This has the effecting of lowering standards generally.

Most of the problems in the United States are not direct, deliberate abuses as a matter of state policy.

Take racism. While racism undoubtedly persists in the United States and discrimination does take place, there are laws and legislation that specifically seek to prevent such cases and allows victims of abuse to have their day in court.

In China, discrimination is institutionalized. For instance, Uighurs, the Turkic minority group in China’s westmost province Xinjiang, are not allowed to take up top provincial Party positions; by law, only ethnic Han Party members need apply.

And it worked. Western media treat the China report with almost as much weight as that issued by the State Department, despite the chasm separating the two.

Quartz mined the China report and compiled an incomplete list of the “human rights offenses” carried out by the United States, without pointing out that many of the items listed—notably America’s “shrinking middle class”—do not count as actual infringements of human rights as determined by international standards.

The New York Times too fell for the PRC’s trolling, describing some of the more controversial cases mentioned in China’s report—such as the Ferguson shooting, and the Senate Intelligence Committee’s report on torture—”sobering reading.”

Granted, both Quartz and the Times point out that official Party propaganda considers economic rights to be human rights, which explains why measures of economic prosperity are considered alongside genuine human rights issues.

But why accept the frame of reference provided by Party propagandists in the first place? For all of the actual social, economic, political, and racial issues that must be addressed in the United States, the ultimate purpose of the China report is to throw out a red herring and distract the public from the Party’s own systematic, institutionalized, top-down, state-led abuses of human rights. Unfortunately, some Western institutions walked right into it.

Larry Ong is a reporter for Epoch Times.