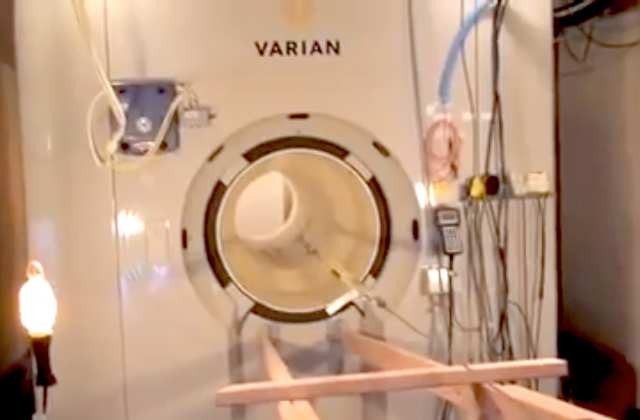 Patients who enter a medical scanning room have to take off all magnetic object, including belts, earrings, and old pacemakers because MRIs, or magnetic resonance imaging machines, can be dangerous.

A video uploaded to YouTube shows the power of an MRI. “The magnet takes an immediate dislike to a stapler, disintegrating it,” the video says. In the footage, the stapler slams into the sides of the metal wall. After that, they show a “wrench exerting some force.”

According to a New York Times report (via IFL Science), there’s been accidents as a result of an MRI’s “strong magnets.” It states:

The pictures and stories are the stuff of slapstick: wheelchairs, gurneys and even floor polishers jammed deep inside M.R.I. scanners whose powerful magnets grabbed them from the hands of careless hospital workers.

The police officer whose pistol flew out of his holster and shot a wall as it hit the magnet. The sprinkler repairman whose acetylene tank was yanked inside, breaking its valve and starting a fire that razed the building.

Safety experts at the time that such accidents are on the rise.

In 2001, a 6-year-old boy in New York died after an anesthesiologist ran to get an oxygen tank when his supply failed. The only one in the hall was made of steel, and when he returned, “the tank shot out of his hands, hitting [the boy] in the head.”