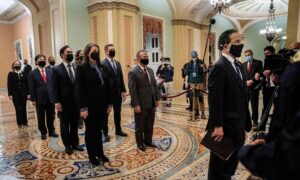 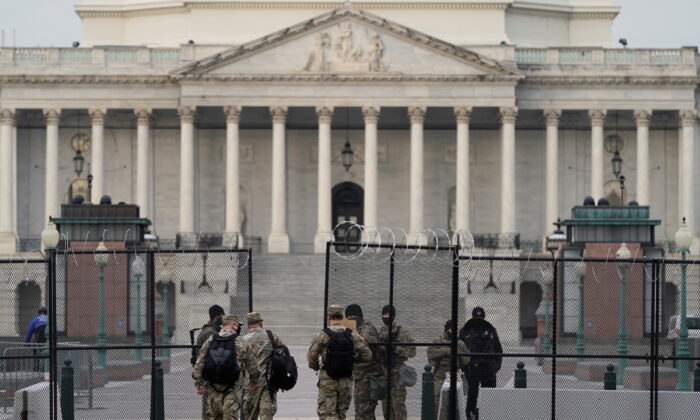 Members of the National Guard patrol at the U.S. Capitol in Washington on Feb. 9, 2021. (Reuters/Joshua Roberts)
Viewpoints

There’s a very strong argument that the Constitution does not permit impeachment of a former president. Unfortunately, President Donald Trump’s lawyers failed to present it.

Admittedly, there’s conflicting evidence on whether the Constitution permits late impeachment. The job of the prosecutors was to present the evidence in favor. Aside from a few slips, they did their job fairly well.

On the other hand, the job of the Trump defense team was to present the evidence against late impeachment. They had three opportunities to do this: in their written Answer, in their Trial Memorandum, and in their speeches to the Senate. By and large, they flunked.

Even though I’m undecided on late impeachment, it’s frustrating and painful for me to see a legal team drop the ball that way.

This article will lay out, step by step, the most important evidence against the constitutionality of late impeachment.

First step: Remember that the Constitution is a legal document—the “supreme Law of the Land.” We interpret a legal document by (1) reading its words, (2) using established guidelines for reading those words (lawyers call those guidelines “rules of construction”), and (3) studying the history behind the document.

Second step: Although lawyers have many rules of construction, one of the most important is this: If the document contains a list, then items on the list generally are included, but those not on the list are excluded.

We apply this rule every day in real life. Suppose my wife tells me to visit the supermarket and gives me a shopping list. The list reads as follows:

Unless there’s something really unusual going on, I know from the list that she’s not asking me to buy German chocolate cake. If I buy it anyway (as I might), it’s my own idea and not her instruction.

This rule—that items not on a list are excluded—was at least as important during the Founding Era as it is today. Participants in the 1787–1790 constitutional debates referred to this rule as a way to construe the document. The rule also played a big role during the debates over the Bill of Rights. It was so prominent that the Founders passed an entire constitutional amendment (the Ninth) to prevent it from applying in a particular case.

Third step: One reason the rule is so important to interpreting our Constitution is that the Constitution contains a lot of lists. The most famous is the document’s principal enumeration of the powers of Congress (Article I, Section 8). Every judge and constitutional lawyer understands that if a power is not on a constitutional list, it’s not there.

Fourth step: The Constitution’s impeachment provisions contain not one, but two lists: (1) the enumeration of reasons for which an officer may be impeached, and (2) who can be impeached.

The Constitution itemizes four reasons for impeachment: “Treason, Bribery, or other high Crimes and [high] Misdemeanors.” In Great Britain and under some of the early state constitutions, a legislative body could impeach for all sorts of reasons—even mere political disagreement. But everyone agrees the Constitution’s list of reasons is exclusive. That means any impeachment would be unconstitutional unless it was supported by guilt of treason, bribery, a high crime (felony), or a high misdemeanor (other serious crime).

Fifth step: The Constitution’s list of who can be impeached includes only three categories: “The President, Vice President and all civil Officers of the United States.”

But wait: Former officers are not on the list, either. A former president isn’t the same as the current president. That’s the real reason Chief Justice Roberts is not presiding over this trial: The Constitution directs him to preside only when the president is tried, not a former president.

Conclusion: According to the uniform way we interpret lists in the Constitution, former officers are not impeachable.

Sixth step: There are a number of subsidiary arguments that buttress that conclusion. Here they are:

In sum: Although the Senate already has agreed to take jurisdiction of the Trump impeachment, that decision is not irrevocable. When senators vote to convict or acquit, let’s hope they weigh the considerable arguments against late impeachment.

Robert G. Natelson, a leading originalist scholar, is the author of “The Original Constitution: What It Actually Said and Meant” and several articles on impeachment. He is a former constitutional law professor and senior fellow in constitutional jurisprudence at the Independence Institute in Denver.