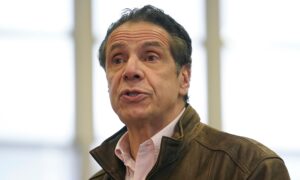 Here They Come in From the Wild Blue Yonder

NEW WINDSOR–Officials gathered at Stewart International Airport in New Windsor, N.Y. on June 18 to announce the New York Airshow on August 29 and 30.

It will mark the first major air show at Stewart International Airport, owned by the Port Authority of New York/New Jersey, since 2003. “This airshow will be the single largest event ever to take place at this airport,” said Harrison.

Since 9/11 Neuhaus noted the county’s proximity to New York City and the security measures put in place since the tragedy. “We’ve had a lot of sacrifices in this county and in the Hudson Valley. It’s time to show something positive to veterans. Orange County is home to 23,000 veterans. We support the troops.”

Col. Wagner said Stewart airport has been the home of the 105th airlift wing for over 30 years and there are about 1300 members now on base.

The airport has a rich military history, originating as an airfield built by the Army in 1943 for aviation training of cadets from the United States Military Academy at West Point. The West Point parachute team will be featured at the event and several different types of Army helicopters will be on display.

The U.S. Air Force F-22 Raptor, the most advanced fighter aircraft in the world, will headline the airshow. Lilley praised this latest addition to America’s arsenal of aircraft.

“It is the only aircraft in the world that can cruise above the speed of sound without after-burners. It has thrust factoring where it can do loops and rolls and do things in the sky that will absolutely just blow your mind. It’s the best.”

With only 186 F-22’s in the fleet, the Air Force limits the Raptor’s airshow demonstrations to just 20 each year. The Marine Corps will show its AV-8B Harrier, and the Navy will bring its F-18F Super Hornet to Stewart’s air space.

The crowd will also be entertained by the Navy Seals Leap Frogs. Lilley said, “They do some things with parachutes that defy the imagination. One of the jumpers will actually be upside down with his parachute. You look at it and go, ‘How do you do that?'”

The New York Air Show will also feature a diverse display of aircraft on the tarmac for the public to enjoy.

For tickets and to learn more about the New York Air Show, go to www.AirShowNY.com. The airshow is expected to generate millions of dollars for Orange County’s economy.