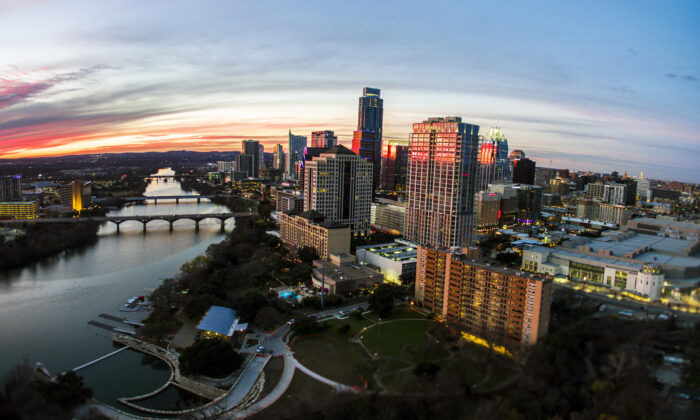 Aerial Austin Texas Sunset Glowing Cityscape Over Capital City of the 2nd largest state in America. The Texas State Capitol building is seen in the distance with the UT tower and the University of Texas. Austonian , Frost bank tower , office buildings and condos and skyscrapers line the north side of the Colorado river , or Town Lake , or Lady bird lake. The Colors from the sunset reflect off mirrors and glass from the urban city skyline with a once in a lifetime view of the Golden City. ATX. (GETTY IMAGES)
Business & Markets

Here Are The US Cities With the Biggest Rent Hikes

U.S. rental prices stabilized this month and showed some signs of cooling down, while month-over-month average price levels remain mostly unchanged, according to Rent.com’s July Report.

Nationwide, rent prices largely remained stable at a 16-consecutive-month record high with one- and two-bedroom apartments still up year-over-year 25.3 percent and 26.5 percent, respectively.

Rent.com states an average apartment is costing $1,701 a month, while Realtor.com reports $1,876.

One reason behind the stable prices is that tenants in some cities saw their monthly leasing fees drop over the previous month, with one-bedroom apartments dropping 0.1 percent.

Year-over-year, two-bedroom units at the state level saw a decline of 13 percent, while one-bedroom units saw a 7.1 percent drop.

Rents in most states remain elevated compared to the same time last year, but some markets are coming down.

The Sunbelt took the lead with the most significant increases in two-bedroom rentals, mainly in cities located in North Carolina, Tennessee, and Arizona.

Cities in the region were the most popular migration destinations during the pandemic, as highly paid employees from other states working remotely moved there, fueling higher rents and leading to pressure on existing housing.

Austin, Texas, witnessed the highest yearly increase in the country, as the price of a one-bedroom rental doubled over the past year by 108 percent to an average of $3,257 a month.

New York City still remains the most expensive place to live in the United States, with a rent increase of 41 percent and an average cost of $5,812 for a one-bedroom apartment.

Some cities where rent declined include St. Louis, Missouri, with rent prices dropping by 32 percent, while rent in Las Vegas fell nearly 13 percent.

However, north of Austin, the Dallas suburb of McKinney, Texas, saw one-bedroom rents decrease 50 percent when compared to last year.

“In the short term, we expect prices to continue to rise,” said Jon Leckie, a data journalist for Rent.com.

“The housing market is still hot, and the levers being used to cool it are all making homeownership more expensive. This means more people will remain renters and rental demand will stay high.”

Realtors in large metropolitan areas report that high-earning renters who are unable to purchase a home are starting to make over-ask offers for rental homes in the ritzier neighborhoods.

Bidding wars, which became commonplace in home buying since the pandemic, are starting to become a factor in the rental market, according to The Wall Street Journal.

“The cost of starter homes actually went up so much that even though rents also increased, it became more affordable in a greater number of markets,” Realtor.com Chief Economist Danielle Hale told FOX Business.

National monthly starter homeownership costs were 29.9 percent, or $561 on average, well above rents in June and were only up 4.4 percent over rents in January.

Meanwhile, home mortgage rates have become the “biggest driver of the widening year-over-year gap between first-time buying and renting,” according to Realtor.com.

The average 30-year mortgage rate jumped more than 2 percent from the beginning of the year through June when it went from 3.45 percent to 5.52 percent, according to Freddie Mac.

The benchmark mortgage rate now stands at 5.51 percent as of last week.

“In fact, our analysis shows that if not for higher mortgage rates, the rent versus first-time buying gap would have shrunk in the first half of this year, as rents grew more quickly than starter home prices,” said Hale.