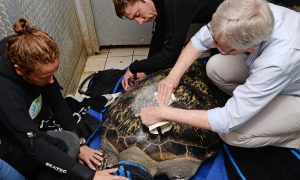 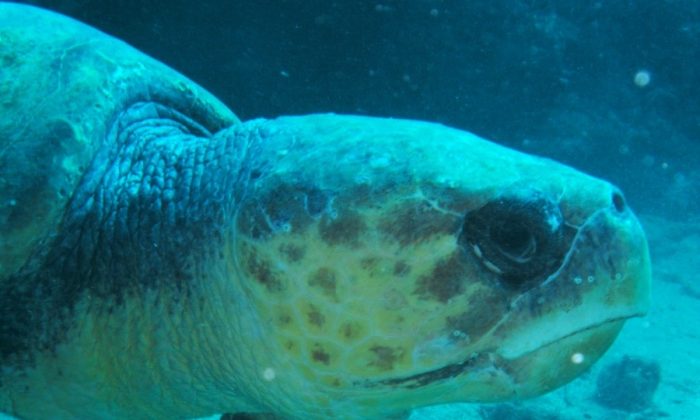 He’s not friendly. He’s not unfriendly. He’s just back. The large male loggerhead turtle has returned to the reefs offshore just south of Boynton Beach, Florida. You can see what looks like an inverted space capsule water tower on Woolbright Road from his usual lair. That is if you were on the ocean’s surface. I’ve seen him on the same reef over the last twenty years. There can be no mistaking him. He is a big turtle dude.

Florida’s Atlantic Ocean reef structure, north of the Keys, runs from Miami to about Jupiter. There are cuts in the reef usually where channels lead from harbors and the Intracoastal Waterway. Mostly the structure is about a mile offshore. The inside edge is found in about sixty feet of water, the outside edge in about eighty feet. Depending on location, the reef can be a hundred yards to a quarter mile wide. The top of the reef is in about fifty feet.

The Gulf Stream meanders in close to shore bringing with it warm waters that course northward from the Gulf of Mexico, through the Straits of Florida, between Cuba and the Keys. Eddies in the Stream can mean divers get caught up in a southward flowing current at times but mostly it flows north. Every year, beginning in about December and January, turtles start coming back to the reefs to mate. It is a ritual that has been going on for eons. It can happen no other way.

How it happens is still a partly unsolved mystery. There were many theories how a reptile, hatched out of an egg on the beach, that gained freedom of the ocean, could return to that very same beach years later when it reached sexual maturity to mate. After mating the females lay their eggs on the same beach, return to the ocean to mate again, nest as many as three times, then go off to the vast oceans until it is time to repeat the cycle of life once more.

Timing has to be on cue. Some researchers thought it was the moon and the horizon. Some figured it was rotation of the Earth. Most now believe that it is magnetism. Turtles are born with magnetic crystals in their brains. These crystals are somehow tuned to the Earth’s magnetic field and it is that magnetic imprinting which guides them across many miles of open ocean to their home reefs again.

Whatever the science of it, the miracle of it is evident. The same turtles return to the same reefs offshore of south Florida’s beaches every year. They mate, the females nest, the eggs hatch out and baby turtles make it back into the surf to float with ocean currents, nibble on sargassum weed, grow to sexual maturity and five years of so later come back again.

Turtles can live a long time. Some venerable old timers are 80 to 90 years old. The greatest menace to marine turtles is mankind. Humans trap them for food, dig up their eggs as a delicacy. Dogs allowed to run free on beaches molest their nests, racoons and predators prowl the beaches. Lights facing the beaches on homes and condos owned by the super-rich disrupt their ability to come ashore to lay their eggs. Beach restoration projects change the beach often making it impossible for turtles to lay eggs.

Turtles are air-breathing reptiles. They must come to the surface to breathe. On the surface they are targets for speedboats. Many are killed by boat propellers, some bear scars of gashes from collisions with boats. Many turtles are killed after ingesting plastic waste thrown into the ocean. Plastic bags resemble jellyfish, a sea turtle’s favorite food. Nets and monofilament fishing lines tangle them. Some marine turtles get so tangled in abandoned fishing lines and ghost nets that they cannot get to the surface to breath and die agonizing deaths.

All seven species of marine turtles are classified as endangered species. They are protected by law in U.S. waters. Still the population wanes every year and statistics are misleading since turtle nests can be counted and species identified but there is no count of how many hatchlings actually make it back to the surf then survive ravenous sea birds and fish. A very small percentage. Every turtle is precious, each enhances our life on Earth and our appreciation for the balance and harmony in nature.

The late Norine Rouse was a pioneer dive instructor in Palm Beach. She took thousands of divers out to the reefs every year. Some called her the Turtle Lady of Palm Beach. Norine had a penchant to swim with marine turtles. She was gentle and respectful. Every year she recorded data in her research logs about their behavior. She had her favorites. Raja was a large male loggerhead that became her special friend over many years only to be replaced with Robert.

Robert was the biggest loggerhead turtle Norine ever measured. Her sewing kit yielded a tape measure that she took on every dive. Turtles recognized Norine. They came up to be petted, some to lay a flipper on her hand and swim with her. They obligingly let her use a scrub pad to remove barnacles from their necks and shells. Norine measured Robert’s shell from neck to tail at 46-inches. Raja was 43-inches. Norine’s logs noted that Robert came to the reefs off Palm Beach in November or December and always left by February 24.

It’s March and the big turtle dude is still here off Boynton Beach. He is about Robert’s size, has a large scar on his carapace that runs from the middle down all the way to his tail. Evidence of a boat propeller that struck him when he surfaced long ago. If you have big hands and put the forefingers and thumbs together that is how large his tail is at the base.

He likes a certain niche in a sand hole on top of the reef. That’s where he sleeps. His big eyes are filmed with cataracts and he swims with even strokes of his large flippers. He lets me take a few pictures sometimes but isn’t keen on posing for long. He cruises the reefs looking for girlfriends.

Once I was on the deep edge of the reef in about eighty feet of water. I looked up to see the big turtle mating on the surface. When he was done he swam down toward me. He looked like a giant cargo plane coming in for a landing. I didn’t move, held my camera steady watching him through the little viewfinder. He came right up to me, swam just over me, touched my head gently with his flipper and swam away.

Encounters with marine animals underwater enrich any diving experience. Animal behavior is not easily studied in the open ocean and the secrets of nature are only revealed a little at a time. As turtles come ashore to lay their eggs the fact that beach sands have been changed in consistency and color by dredging and renourishment programs may foretell eventual extinction of the species.

We all know that color affects temperature. If we wear white in the sun we are cooler. Black absorbs the sun’s rays and we are hotter. The same with sand. White sand reflects sun’s rays, black sand absorbs them. When temperatures in the sand above turtle eggs reach 86 degrees F or more the eggs hatch as females. Temperatures of 82.4 degrees F mean males will hatch.

Dredged sand for beach renourishment programs is taken from offshore. It is darker in color than normal white coral sand of Florida’s beaches. The result of all these misguided programs that are washed away with every hurricane, replaced again when wind and waves blow in another direction, is to create dark sand of coarse grain. Dark sand increases temperatures above turtle nests. Thus more females hatch creating an imbalance.

For now at least the big turtle dude cruises the reefs. He mates and passes on his genetic makeup to future generations. In time they will hatch out and return to the reefs for other divers to admire. That is if we respect the laws of nature.