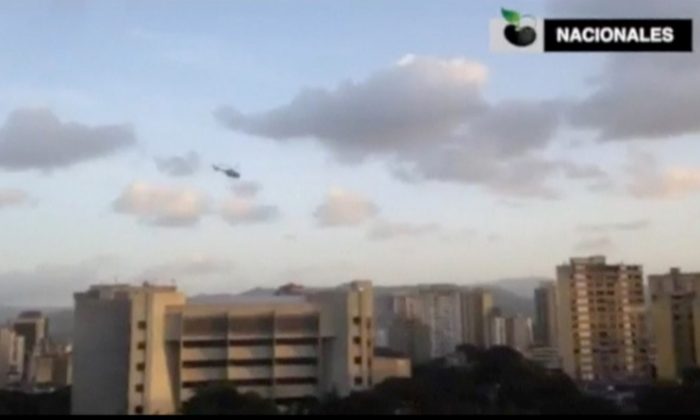 A police helicopter flies over Venezuela's Supreme Court building in Caracas June 27, 2017, in this still image taken from a video. (Caraota Digital/Handout via Reuters)
International

A Venezuelan police helicopter strafed the Supreme Court and a government ministry on Tuesday, escalating the OPEC nation’s political crisis.

The aircraft fired 15 shots at the Interior Ministry, where scores of people were at a social event, and dropped four grenades on the court, where judges were meeting, officials said.

However, there were no reports of injuries.

The 54-year-old socialist leader has faced three months of protests from opposition leaders who decry him as a dictator who has wrecked a once-prosperous economy. There has been growing dissent too from within government and the security forces.

At least 75 people have died, and hundreds more been injured and arrested, in the anti-government unrest since April.

Venezuela’s government said in a communique the helicopter was stolen by investigative police pilot Oscar Perez, who declared himself in rebellion against Maduro.

Images shared on social and local media appear to show Perez waving a banner from the helicopter reading “Liberty”, and the number “350” in large letters.