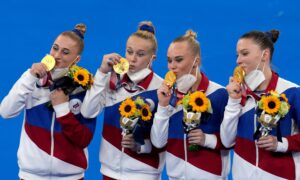 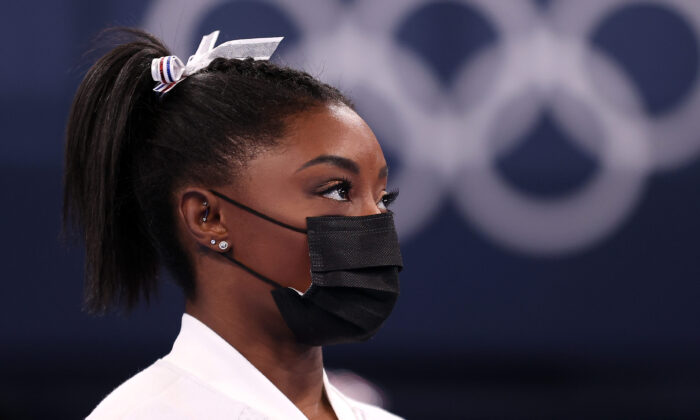 Simone Biles of Team United States watches her team perform on bars after pulling out of the competition after only competing on the vault during the Women's Team Final on day four of the Tokyo 2020 Olympic Games at Ariake Gymnastics Centre in Tokyo, Japan, on July 27, 2021. (Laurence Griffiths/Getty Images)
Tokyo 2020 Olympics

Helene Elliott: ‘We Can All Learn From Her Courage’: Simone Biles Not Alone in Mental Health Struggle

TOKYO—For nearly a decade Simone Biles seemed not only unbeatable but unshakeable.

She would reel off the most difficult gymnastics maneuvers with a daredevil’s spirit and an artist’s passion, her smile brighter than the 25 medals she won at the world championships and the five she won while dominating the 2016 Rio Olympics. She was declared the GOAT—greatest of all time—and she embraced the role with good humor by wearing leotards cheekily adorned with a glittery goat.

Few people realized that behind the perky hair ribbons and spangles is a young woman who has been bruised by life, first in the foster care system when her addict biological mother couldn’t care for her, and later when she was among hundreds of girls and women who were sexually abused by former national team doctor Lawrence Nassar. She thought of committing suicide in the aftermath of the abuse, she recently acknowledged in a Facebook Watch docuseries.

The past recedes but its traumas can hauntingly return in times of stress. Add an extra year’s wait for the Tokyo Olympics because of the COVID-19 pandemic and the expectations Biles faced as a potential six-time gold medalist here, and a toxic brew began to percolate.

Biles, 24, long ago took the vital step of seeking help for the anxiety and doubts that recently eroded her confidence on the gym floor. Even so, her nerves resurfaced publicly in Tokyo. During the team competition she didn’t know where she was in the air on a vault, a terrifying and potentially debilitating state of disorientation that gymnasts call “the twisties.” Wisely, she withdrew. She got off the merry-go-round before she fell off and became too broken to repair.

With that in mind, it came as no surprise on Wednesday that she opted out of the all-around final, one of the four events in which she won gold in 2016.

“After further medical evaluation, Simone Biles has withdrawn from the final individual all-around competition at the Tokyo Olympic Games, in order to focus on her mental health,” USA Gymnastics said in a statement. “Simone will continue to be evaluated daily to determine whether or not to participate in next week’s individual event finals. Jade Carey, who had the ninth-highest score in qualifications, will participate in her place in the all-around.

“We wholeheartedly support Simone’s decision and applaud her bravery in prioritizing her well-being. Her courage shows, yet again, why she is a role model for so many.”

While some self-important talk show hosts derided her as cowardly, while critics accused her of abandoning her team—when in truth she showed trust in her teammates to perform under unimaginably tough circumstances—other athletes quickly came to her support. It’s worth paying attention to the people who best understand what she’s confronting. Many have been there.

“She seems like she’s doing what’s best for her and it’s been awesome to see that she’s been able to go against the pressures of society and do what’s best for herself,” said Sam Mikulak of Newport Coast, Calif., who finished 12th in the men’s all-around on Wednesday.

Mikulak said Biles was in good spirits when they talked after Tuesday’s competition. “Really proud for her for prioritizing mental health and making sure that everyone knows and understands we’re not just athletes. We’re human beings, and sometimes it’s too much, and when that’s the case, you’ve got to do what’s best for you,” he said.

Mikulak, who has been open about his own mental health struggles, said social media can trigger anxiety and expose athletes to outsiders’ demands. “On Twitter [the tone is] ‘I’m really expecting this, I want this from this person. Oh, Simone is going to be the medal factory of the world,’ ” he said. “When you get these conversations, all this hype and everyone starts talking about it, it gets in your head a lot and it starts changing you to what other people want you to be rather than you being able to stand up for yourself and be who you want to be. There’s just a lot of toxicity out there and it’s better just to not have that, in general and just focus on yourself a lot more.”

Like Biles, Chris Evert appeared to be so unshakeable that she was nicknamed “Ice Maiden” early in her tennis career. Nothing seemed to rattle her as she became the No. 1 player in the world and won 18 Grand Slam singles tournaments. Asked her thoughts about Biles’ withdrawal from the team event, Evert hinted she, too, had dealt with private turmoil.

“Yes, there were times when I wanted to run away and hide … in the woods … anywhere,” she said on Twitter. “It’s overwhelming, but we didn’t have communication or information in those days about mental health…”

Evert praised Biles and tennis player Naomi Osaka, who played in the Olympics after taking a mental health break that included withdrawing from the French Open. “Bravo,” Evert said. “You are showing such courage in speaking out for ALL young athletes who experience nerves, stress, expectations and pressure. This is a very profound moment in sports. Thank you.”

“Really proud of @Simone_Biles for having the courage to make such a difficult decision,” he wrote on Twitter. “I encourage everyone to have compassion for her and try to understand the pressure she was dealing with. She’s a human being first and an athlete second. We can all learn from her courage.”

If Biles doesn’t compete again in Tokyo, she has accomplished enough in gymnastics to keep that “GOAT” nickname. She has accomplished something else important by bringing athletes’ mental health issues to the forefront on an international stage. “Everyone wants athletes to be indestructible and perfect all the time,” Mikulak said.

They are not. We shouldn’t expect them to be, no matter how perfect they might look.