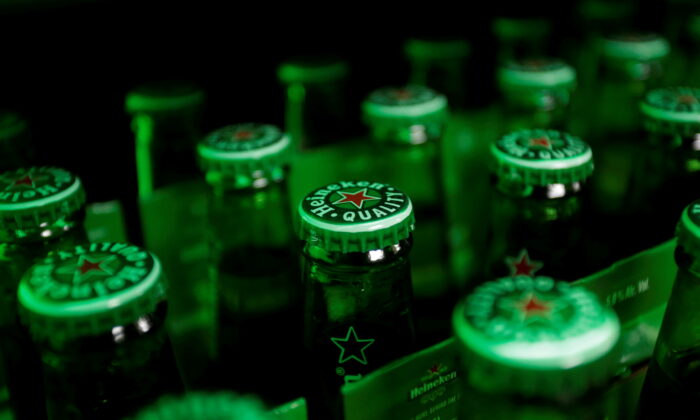 Heineken said on Feb. 16 that the CCP virus pandemic will affect its revenues for 2022, and that inflation and supply chain pressures are a significant factor.

The world’s second largest brewer, whose brands also include Amstel, Tiger, and Moretti, joins its rival Carlsberg in sounding caution over inflationary pressures that threaten to hinder their recovery.

The Dutch brewer said that inflation was “off the charts,” increasing the price of beer and a risk of outright shortages that appears imminent as brewers face persistent challenges delivering beer to bars, restaurants, and supermarkets, said Dolf van den Brink, Heineken’s chief executive in an interview with The Financial Times.

Heineken said that the rise in costs for ingredients, energy, and transport may lead to a 15 percent increase in operating costs this year, putting the price burden on the consumer, which could lead to lower beer consumption.

It said that it still aimed for an operating profit margin of 17 percent in 2023, but that there was “increased uncertainty” given the economic environment and rising input costs.

The Heineken CEO said that it was impossible to predict how additional price rises would affect consumption, adding that the usual models they normally use to predict consumer behavior are unsuitable.

“In my 24 years in the business, I’ve never seen anything like it—not even close,” said van den Brink, and that “across the board we are faced with crazy increases.”

“There’s no model that can handle this kind of inflation. It’s kind of off the charts so it’s anybody’s guess … what the impact is going to be on volumes due to all these price increases,” he added.

The Heineken CEO said that the brewing industry is increasingly about availability of supplies and distribution costs as the global supply chain crisis lingers on.

“There’s a lot of focus on pricing and inflation, but there’s also this whole notion of ‘can you actually get it at any price’,” said van den Brink.

“There’s such shortages of truck drivers, everybody’s scrambling to get their products moved … ocean freight is completely out of sync,” he said.

However, he has only observed a few pockets of shortages worldwide, but says the risks will go up the longer the supply bottlenecks continue.

The Dutch CEO said that the industry is not over the pandemic, but “the direction of travel is indeed more positive.”

“Overall, we expect a stable to modest sequential improvement in operating profit in 2022,” the company said in a press statement.

Heineken was still aiming for an operating profit margin of 17 percent in 2023.

The brewer, however, said there was “increased uncertainty” about a midterm forecast for profitability and that it would update guidance for 2023 later this year.

The brewer said it had sold 4.6 percent more beer in 2021 than in 2020, with increases in all regions except Asia, while price increases and a shift to more expensive beers drove net revenue up 12.2 percent.

There are some reasons to think consumers will manage the price rises, said van den Brink, as savings accumulated during lockdown could help some households cope with rising costs.

He believes that Heineken’s other well-recognized brands, which include Strongbow hard cider, allow it to diversify its product lines, making it less vulnerable than rivals that primary sell one type of product.

Meanwhile, other major companies in the food and beverage sector, like Kellogg and PepsiCo, have also said that they are passing higher price costs on to consumers.