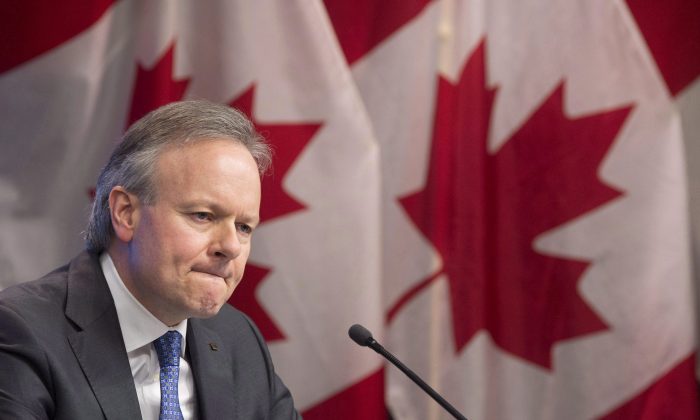 Bank of Canada Governor Stephen Poloz is seen during a news conference in Ottawa on Jan. 17, 2018. Canada's central bank left its key policy rate at 1.25 percent on March 7, 2018. (The Canadian Press/Adrian Wyld)
Economy

Heightened Worry for Bank of Canada on Trade

OTTAWA—After raising rates three times in the past five meetings leading up to its interest rate decision on March 7, the Bank of Canada held its overnight rate target at 1.25 percent and signaled greater concern about growing protectionist tones.

As trade uncertainty and a less competitive landscape for business become entrenched, the Canadian economy’s rapid growth period is also firmly in the rear-view mirror. A period of slower economic growth relative to the United States looks to be underway.

Canada’s fourth-quarter GDP came in at 1.7 percent—well below the bank’s January projection of 2.5 percent, which was actually how fast the U.S economy grew in the fourth quarter. The BoC attributed this underperformance to a rise in imports as exports failed to fully recover after a third-quarter decline.

“The gain in imports mainly reflected stronger business investment, which adds to the economy’s capacity,” said the BoC in its March 7 press release.

But with the massive U.S. tax cuts announced in late December, the signs point to weaker business investment in Canada going forward.

The bank made an adjustment in its January projections for business investment and trade being lower. Canada is not attracting foreign investment—it hit seven-year lows in 2017—and energy-sector capital spending is heading south of the border.

Last week’s federal budget did not take measures to ease the tax burden on business as a way of addressing the loss of competitiveness relative to the United States.

“Canada had a spectacularly good first half of 2017, but I think that was a real anomaly,” said Steve Ambler, the David Dodge chair in monetary policy at the C.D. Howe Institute, in a phone interview. “I think the trend is for real growth to be lower than real growth in the U.S.”

In addition, the threat of a trade war after U.S. President Donald Trump’s proposal for global tariffs on steel and aluminum has ramped up.

“Trade policy developments are an important and growing source of uncertainty for the global and Canadian outlooks,” said Canada’s central bank.

In a Financial Post editorial, Jack Mintz, President’s Fellow at the University of Calgary’s public policy school said: “Losing NAFTA would kick another leg out from Canada’s weakening competitive appeal. No wonder so many businesses are extremely cautious about making big investments.”

“We’re predicting that if this nastiness on the trade side unfolds, that Canada will be looking at a period of weak real growth combined with higher inflation,” Ambler said in reference to an editorial he is co-writing with colleague Jeremy Kronick.

Statistics Canada’s annual survey of capital spending showed subdued expected growth in 2018 of 0.8 percent. Private sector spending was projected to fall 1.1 percent. This decline is being led, for the fourth consecutive year, by the oil and gas sector with companies moving capital spending south of the border.

The bank repeated its dovish statement from January that while the economy continues to strengthen and warrants higher rates over time, “some continued monetary policy accommodation will likely be needed,” for inflation to move toward the 2 percent target and the economy to operate at its full potential.

“In stark contrast to the outlook for the Fed, the risk likely lies on the side of the bank doing less than the market expects this year, not more,” said BMO chief economist Doug Porter in a note.

The changing economic currents are seen in the Canadian dollar, which dipped below US$0.73 in May 2017 before surging to over US$0.825 in September. During that time, the Bank of Canada raised rates by 0.50 percent as the Canadian economy steamed ahead. Lately, the loonie has eased below US$0.78 as the economy starts to lose ground to the United States and the differing prospects for interest rates take hold.

A cheaper currency might be the only thing to help Canada’s competitiveness.