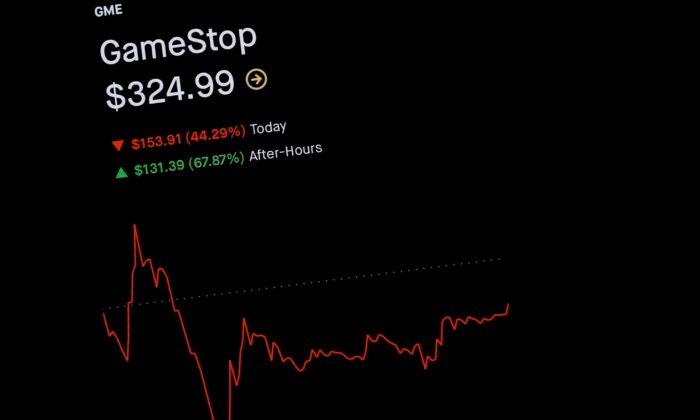 Trading information for GameStop is displayed on the Robinhood App in this photo illustration on Jan. 29, 2021. (Brendan McDermid/Reuters)
Investment

Since the Federal Reserve revealed its intentions to taper monetary policy, hedge funds have been diminishing their exposure to risk, new data show. But retail traders are piling into stocks, offering support to the leading benchmark indexes.

New data, compiled by experts at Goldman Sachs’ brokerage firm and reported by Bloomberg, revealed that hedge funds have been bailing from equities. As a result, net leverage, a measurement of risk appetite that considers long versus short positions, declined to its lowest level in about a year earlier this month.

The numbers are comparable to the Bank of America’s research. The financial institution recently reported that hedge funds are deleveraging, dumping more than $2 billion at the beginning of December. This is the fastest rate since April.

Be it the S&P 500 or small-cap stocks, exits from positions have been broad-based, and the reasons for this shedding of stocks also vary.

Goldman Sachs stated that some money managers have alluded to tax-loss harvesting, and others want to take their 20 percent in gains and run. Many are also pointing to the U.S. central bank’s shift in monetary policy as it attempts to fight 39-year high inflation.

When the Wall Street giants published the data, Fed Chair Jerome Powell had retired the term “transitory” when talking about inflation and signaled accelerated tapering of the institution’s pandemic-era quantitative easing stimulus and relief tools.

Despite the exceptional year-to-date rallies for the U.S. chief indexes, they have been in a rough patch in the home stretch of 2021.

Over the last month, the Dow Jones Industrial Average has lost about 0.6 percent. The S&P 500 has tumbled approximately 1.5 percent. The Nasdaq Composite Index has slumped more than 5 percent, while the Russell 2000 Index has declined roughly 7 percent.

But while the hedge funds are selling, retail investors are taking advantage of the dips.

Although investors have highlighted their consternation over the Omicron variant and its impact on the global economic recovery, individual traders are not as apprehensive. Recent data spotlight the fact that armchair investors are sticking to their buy-the-dip strategy.

According to figures put together by Vanda Research, individual investors recorded a single-day record on Dec. 1. During this session, they poured $2.22 billion into the stock market, scooping up large-cap technology firms, such as Apple and Uber Technologies, and exchange-traded funds (ETFs) that mirror indexes, including the SPDR S&P 500 ETF Trust and Invesco QQQ Trust Series 1.

Researchers note that vaccine makers, like Pfizer, have also garnered the attention of retail investors.

Armed with their zero-commission mobile trading apps, study authors assert that these investors have been quite aggressive in buying whenever there is a sharp sell-off, resulting in notable retail inflows.

“Retail investors have bought every minor dip in equities this year, shielding the S&P against a double-digit sell-off,” analysts Ben Onatibia and Giacomo Pierantoni stated in a note.

Financial experts warn that this might not always generate massive gains comparable to the meme stock craze from earlier this year, which saw incredible spikes in AMC, GameStop, and a plethora of others.

Goldman Sachs reported that a basket of the 50 most popular stocks owned by individual investors fell by 7.8 percent in the week ending Dec. 3 and trailed equities more favored by mutual funds by 5.8 percent.

So, will hedge funds buy back into the financial markets next year? Will retail investors maintain their investment tactics since the coronavirus-induced meltdown in 2020?

Wall Street titans have been offering their expectations for 2022, and many market analysts are anticipating a better year.

The Bank of America released a new report, authored by several of its Global Research economists, that concentrated on the threats to the global economy heading into the next calendar year.

Price inflation, the Omicron variant, climate change, and supply chain disruptions are leading the factors industry observers will be monitoring, the report stated.

“Inflation will cool from the current highs but remain well above target, leaving the Fed to move into action,” the economists wrote. “While 2021 was a story of excess demand and a dearth of supply, we think 2022 will be one of rebalancing, albeit only gradually. This should take some of the heat off of inflation but not quickly enough, leaving the Fed to hike three times starting in June and continuing on a quarterly cadence.”

“Currently, I see opportunities in financials, energy, and utilities. There’s pretty good dispersion there, which means there is a lot of variation in how different companies within those sectors are priced,” said Ramona Persaud, a Fidelity portfolio manager.

Charles Schwab is also penciling in a good year for the financial market as it anticipates slowing inflation, eliminated pressures over the debt ceiling until early 2023, and the Fed potentially not being as hawkish on interest rates as it has suggested.

“Overall, the message from the yield curve seems to be that the Fed may not have as much scope to raise short-term rates as its forecasts suggest,” the financial services firm noted.

At the end of its two-day Federal Open Market Committee (FOMC) policy meeting, officials agreed to end the central bank’s asset-buying program by March, with the dot-plot indicating multiple rate hikes in 2022.