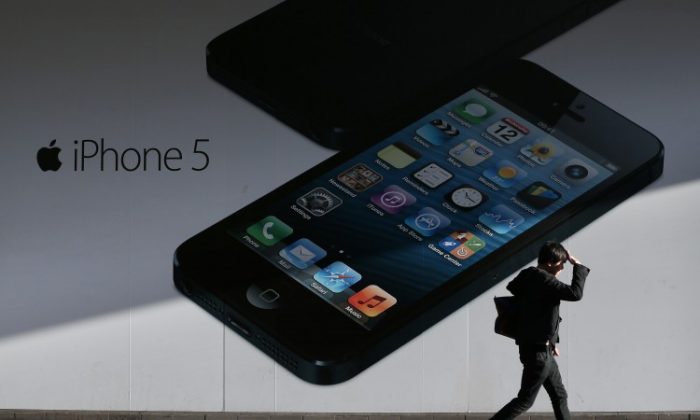 A shopper walks past a giant advertisement for the Apple iPhone 5 near Oxford Street on Dec. 17, 2012 in London. Hedge fund manager David Einhorn argues that Apple should do more to unlock shareholder value. (Peter Macdiarmid/Getty Images)
Business & Economy

Hedge fund manager David Einhorn launched a PR offensive to prompt Apple Inc. to disperse more of its cash to unlock shareholder value. He also sued the company for wanting to eliminate preferred stocks from its corporate charter.

“As holders of more than 1.3 million Apple shares, Greenlight is alarmed that Apple is attempting to eliminate preferred stock from its corporate charter, hindering its ability to unlock value for shareholders,” says a press release by Greenlight Capital, a hedge fund headed by Einhorn. Its stake was worth $608 million as of Feb. 7.

Einhorn, who famously shorted Lehman Brothers shares prior to its collapse, says that Apple is going against SEC rules to push through a proposal to eliminate preferred dividends.

He claims that SEC rules stipulate that a company cannot tie different issues to one vote. Apple is having shareholders vote on the proposal to eliminate preferred dividends and two other issues. Einhorn wants to preserve the company’s ability to issue preferred dividends and on Feb. 7 launched a PR campaign to push Apple to issue preferred shares. Einhorn thinks that Apple has been too conservative in hoarding its cash and thinks more of it should be disbursed.

“With this conservative action, Greenlight believes the Board could unlock hundreds of billions of dollars of latent shareholder value,” the fund says. Einhorn claims that issuing $50 billion worth of preferred shares yielding 4 percent would unlock $30 billion in value, boosting Apple’s share price. Details as to how Greenlight arrived at their numbers were not included in the statement.

Einhorn says that investors will reassess the value of the company’s cash and can take advantage of tax benefits that preferred shares carry.

The Cupertino, Calif.-based company also reassured investors that it is committed to returning cash either through stock buyback or regular dividends. “We announced a plan to return $45 billion to shareholders over three years. As of next week we will have executed $10 billion of that plan,” says the release.

Shares rose 3 percent to $468 on the Nasdaq Feb. 7 as Apple confirmed that it was not against Greenlight’s proposal. “We will thoroughly evaluate Greenlight Capital’s current proposal to issue some form of preferred stock,” Apple says.

Cash Should be Spent, Not Disbursed
“[Einhorn is] approaching this from a trader’s perspective, and not from the perspective of a strategic long term investor,” writes Reggie Middleton on his BoomBustBlog website. “To date, Apple has outperformed nearly all hedge funds in the reinvestment of its cash.” The analyst and newsletter writer thinks that the cash can be put to better use.

Is the Cash Real?
In addition to the different strategic options Apple has, more technical issues arise when looking what the $137 billion in “cash”—as of its last earnings report—actually consist of.

Looking at the company’s latest quarterly report filed with the Securities and Exchange Commission (SEC), several issues stand out. One is that only $16.2 billion is invested strictly in cash and liquid cash equivalents.

The bulk of Apple’s assets that are commonly referred to as “cash” are actually invested in long-term marketable securities, which are less liquid and prone to volatile moves in price. This sub-category makes up $92 billion of the total $137 billion. Of the $92 billion, $39 billion are invested in corporate securities, which could be either corporate bonds or equities.

This effectively means that Apple cannot sell these securities as they might be illiquid or have suffered from price declines. In addition, a significant amount of these assets is stored offshore, most likely for tax reasons.

This again represents a technical issue that does not make Apple’s cash readily available to disburse, at least not without suffering some form of capital-gains tax, thereby reducing the perceived value.

“Greenlight believes these preferred shares represent a simple, low-risk way to reward shareholders without compromising the financial and strategic flexibility of the Company, or forcing the company to incur tax on repatriating its offshore cash balances.”