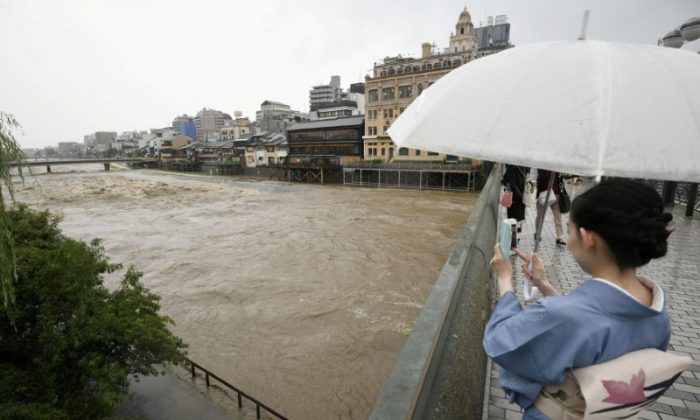 Heavy Rains Force Evacuation of Thousands in Japan, One Killed

TOKYO—Japan on Thursday ordered the evacuation of thousands of residents from the outskirts of its ancient capital of Kyoto after “historic” rains battered its western region, killing a man, with yet more rain forecast.

About 160,000 people were advised to evacuate across the region as weather officials warned that rain levels they described as “historic” could continue until Sunday.

“Severe caution is needed,” an official of Japan’s Meteorological Agency (JMA) told a news conference, warning of the potential for landslides and high winds.

A 59-year-old construction worker died in the western prefecture of Hyogo after being sucked into a drainage pipe, and two more were injured as they rushed to his rescue, NHK national television said.

Evacuation orders went out in some outlying parts of Kyoto, with the Kyodo news agency saying about 16,000 people were affected. Television broadcast images of the swollen waters of the Kamo River in the city center.

The heavy rains were brought by a rush of humid air from the south and the remnants of a typhoon this week.

By Thursday afternoon, rainfall of about 457 mm (18 inches) had been recorded in some parts of the smallest main island of Shikoku over the last two days, with up to 400 mm (16 inches) more predicted in some areas in the next 24 hours.

Typhoon Prapiroon churned up the Sea of Japan this week before weakening into a tropical depression. Another storm, Typhoon Maria, has formed in the Pacific and is set to strengthen, possibly targeting the southwestern islands of Okinawa early next week.