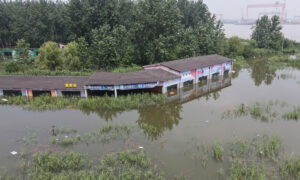 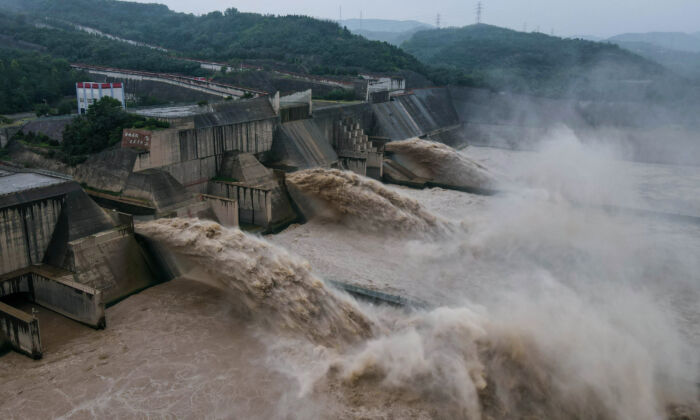 Water is released from the Xiaolangdi Reservoir Dam on the Yellow River in Luoyang, China, on July 19, 2020. (STR/AFP via Getty Images)
China Society

After severe flooding in the Yangtze River drainage area in July, heavy rain has now hit another major waterway in China, the Yellow River.

A 646-year-old building in Xi’an city, located in western China and midstream of the Yellow River, partially collapsed on Aug. 8, injuring at least four people.

Floodwaters inundated cities and villages in Shaanxi, Shanxi, and Henan provinces, also located midstream of the Yellow River. At the same time, authorities discharged floodwaters from downstream to rural areas of Shandong Province on the eastern coast.

China’s Ministry of Emergency Management (MEM) announced on Aug. 9 that the river’s upper stream region and northeastern China would experience heavy rainstorms from Aug. 9 to Aug. 11.

The country’s southwestern regions of Sichuan, Yunnan, Guizhou, and Tibet also were forecasted to have heavy rain in the coming days, the MEM warned.

China’s minister of water resources E Jingping hosted a seminar in Beijing on Aug. 8, in which he and deputy minister Ye Jianchun assessed the flood situation.

“Local governments should act in advance to discharge water from rivers and lakes [to rural areas],” E told officials from Anhui, Jiangsu, and Shandong provinces at the seminar, according to a government press release. “In the coming weeks, we must … preserve the capability of reservoirs to accommodate possible floodwaters.”

He didn’t provide details about the flooding, but said the northwestern areas of Shaanxi and Shanxi provinces were facing mudslides in the mountain areas.

Though flooding had subsided on the Yangtze River, water levels at the mid and downstream regions of the river were still higher than the alert level, E said, meaning there are risks of embankment breaches.

Also, the water levels of lakes and rivers in the Huai River drainage area were much higher than the alert level. The region is set to have heavy rain and storms in the next three days.

A broadcasting website operated by China’s MEM reported on Aug. 9 that flooding in Luonan county, Shaanxi, killed at least four people, with 11 missing. Heavy rain on Aug. 6 led to authorities cutting off electricity, communication, and roads. Thousands were forced to relocate.

In Xi’an city, the capital of Shaanxi, 10 meters of the city wall of Qin Palace, a king’s residence built during the Ming Dynasty, collapsed in the heavy rain on Aug. 8. The wall was built in 1374 and is located in the city center.

Shaanxi local media reported that bricks and mud that fell from the wall blocked the nearby road, injuring four passersby, and damaging three sedans and a bus.

On Aug. 7, a building with more than 30 stories collapsed in Xianyang city, Shaanxi. Emergency workers used rubber boats to ferry flood victims to the hospital.

Though officials and state-run media gave little information about the flooding, locals posted on social media that floods also inundated cities and villages in Shaanxi and nearby Gansu Province.

Downstream of the Yellow River, the local government discharged floodwaters from Dongping Lake in Shandong Province to rural areas on Aug. 6, according to China’s Ministry of Water Resources.

Authorities warned that stronger floods could arrive at the Yellow River soon, which would affect Gansu, Ningxia, Shaanxi, Shanxi, Henan, and Shandong.