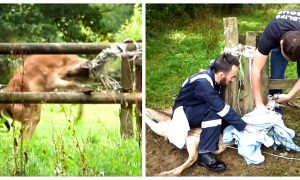 Each and every year, billions of animals die in the wild due to one reason or another. Many of these reasons are caused by humans, and as a result, it is our obligation as humans to help out animals as much as possible.

This is something that can be seen in this video. A fully grown red deer was apparently walking on the ice of a lake, when the ice broke under its feet, and it fell into the water. The poor deer struggled to get out, but all it did was break more ice around it as it tried.

Bystanders, who saw all of this happen, rushed to the aid of the deer. They walked carefully along the ice, and wrapped a rope around it. They then started to break apart the ice, forming a path for the deer to make it to dry land.

Since it was so cold, they had to do something to help the deer warm up, so they lay it by the fire, and rubbed it to increase circulation. After a little while, they decide that it would be the best choice to haul the guy into town, which they do by strapping it to a sled connected to their car.

After keeping it for a bit, and making sure that it was warm and safe, they later released them, which the deer can be seen rushing back into the forest, probably happy that it was saved from the cold ice.

This is a touching video, as it shows that humans have a kind and thoughtful heart. We need more people to show kindness, as it spreads throughout the community. We are glad that this video is being shared, and making people have a happy and thoughtful day.