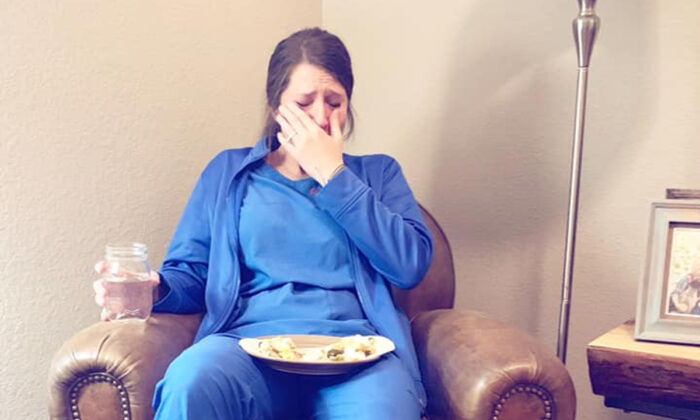 Nurse Caty Nixon slumps in a chair and sobs. (Courtesy of Laura McIntyre/Facebook)
US News

A photo of an exhausted nurse seen breaking down after a particularly tough shift has gone viral.

On Oct. 18, Laura McIntyre, from Texas, shared a picture on social media of her twin sister, Caty Nixon, slumped in a chair and sobbing after a string of difficult shifts which saw her deliver a stillborn baby.

McIntyre had taken the photo in her living room earlier this year but had not shared it until this week.

In the heartbreaking photo, Nixon can be seen wearing blue scrubs as she sits with a plate of half-eaten food on her lap and wipes away tears.

Posting the picture on Facebook, McIntyre wrote: “She’s gonna [sic] kill me for this pic, but can we just give it up for nurses for a minute?”

She explained that at the time the photo was taken, Nixon had just finished her fourth shift in a row.

McIntyre continued: “She usually doesn’t get a chance to eat lunch or even drink much water. She is so good at what she does that she often forgets how to take care of herself while she’s taking care of her patients.”

The mum-of-one explained that the photo had been taken in July after Nixon had come to her house following a particularly difficult day which saw her deliver a stillborn baby.

She went on: “Have you guys ever really thought about what a labor and delivery nurse sees? They see great joy in smooth deliveries and healthy moms and babies. They see panic and anxiety when a new mom is scared.

“They see fear when a stat c-section is called. They see peace when the mom has support from her family – because not all new moms do. They see teenagers giving birth. They see an addicted mom give birth to a baby who is withdrawing.

She then explained that arrangements have to be made for the funeral home to come and pick up a baby that is stillborn, admitting that she had no idea about this.

McIntyre concluded: “Caty (and all other nurses) – you are special. You bless your patients and their families more than you will ever know. Thank you for all that you do.”

The touching photo garnered an overwhelming response form social media users around the world, who shared their support and praise for all nurses for their hard work.

Shortly after it went viral, Nixon told Good morning America: “I don’t like being in the spotlight, and I love that Laura wrote a tribute to not only me – but to all nurses – for our passion and dedication, even through the roughest days.”

She explained that the job is full of highs and lows, describing how the worst feeling is “knowing that even when you’ve done everything you can for someone, we’re not able to change the outcome (for fetal loss, poor prognosis, etc.).”

Nixon said she thinks the photo resonated with so many because of the “raw emotion” it captured.