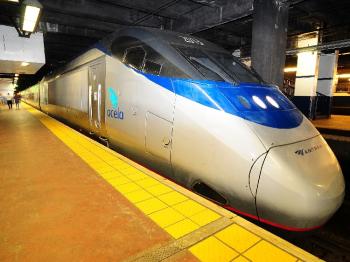 ACELA EXPRESS: The proposed new high-speed railway would go much faster than the existing Acela Express, which is touted at reaching speeds of up to 150 miles per hour. (Lisa Lake/Getty Images for Amtrak)
US

Tara MacIsaac
Tara MacIsaac is an editor and reporter who has worked on a variety of topics over the course of her ten years with The Epoch Times, including science, the environment, and local New York news. She is currently working with The Epoch Times edition based in Southern California.
View profile
Follow
biggersmaller
Print
NEW YORK—President Barack Obama committed to investing in high-speed passenger railway infrastructure in his State of the Union Address earlier this week. With 25 percent of the nation's population situated between Washington and Boston along the Northeast Corridor, Rep. Bill Shuster (R-Penn.) said it's a good place to start.

A congressional field hearing convened at Grand Central Terminal Thursday to discuss Amtrak's $117 billion plan to dedicate two tracks to running passenger trains at 220 miles per hour along the corridor. Amtrak trains currently run at about 80 miles per hour.

These grand plans made their debut in September 2010 and received strong support from Obama on Tuesday. Travelers won't be making the speedy trips anytime soon, however. The initiative has a time frame of 30 years.

“Within 25 years, our goal is to give 80 percent of Americans access to high-speed rail,” Obama declared on Capitol Hill Tuesday.

Joe Boardman, president of Amtrak, said it takes years just to get a new train car.

The projected cost of $117 billion is no small sum either. Even if Obama is prepared to invest in rail infrastructure, that kind of hefty investment must come in installments.

A major focus of the hearing centered on how to encourage private investment. The panel saw the uncertainty of the venture as a major roadblock. A change of the ruling body could put the entire project at risk and turn some investors away.

Rep. John Mica (R-Fla.) said they must look into drafting legislation that would guarantee the longevity of commitment.

While the politicians trumpeted private investment, labor union representatives declared their dissatisfaction with getting private investors involved. For them, it would mean a new employer that they may or may not trust.

“If you open up Amtrak lines to other entities … a foreign entity, like communist China, can underbid and take over the service,” said John Risch of the UTU Transportation Union. Throughout the discussion, speakers referenced how China could progress with the high-speed rail quickly because their government is essentially a “dictatorship” that does what it wants, often without concern for how others are affected.

Robert Scardelletti, president of the Transportation Communications Union, pointed out that the Chinese regime could plow through someone's backyard to build a rail without a thought. In America, however, homeowners as well as the environment must be considered.

Investors' interests were represented by Petra Todorovich, director of America 2050, a national urban planning initiative interested in infrastructure growth. She pointed out another obstacle, one that the congressional delegates agreed must be addressed: Environmental Impact Statements can slow down projects for years.

Todorovich recognized, however, that the corridor railways would be a good investment if a solid plan is developed.

“Population and employment density around train stations [along the Northeast Corridor] dwarf figures in other mega-city regions in the nation,” she said.

Former Pennsylvania Gov. Ed Rendell pointed out that a $72.5 million investment in the rails between Philadelphia and Harrisburg showed the potential for a good return. When the trip was shortened from two hours to 90 minutes, ridership rose from 890,000 to 1.1 million.

“If you build it, they will come,” said Rendell, quoting the movie “Field of Dreams.”